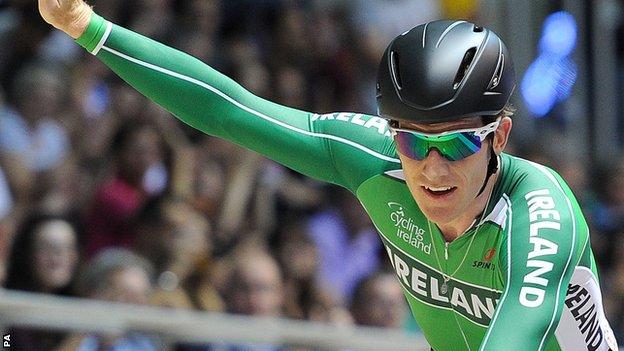 Northern Ireland's Martyn Irvine will not be competing in this year's Giro d'Italia because his team have not gained a wildcard entry for the race.

The world-famous event travels around Northern Ireland for its first three days in May and Irvine was seen as a big marketing draw.

The 28-year-old from Newtownards won the scratch race at the 2013 World Track Championships in Belarus.

His UnitedHealthcare team have not been selected for the Giro d'Italia.

Irish national under-23 champion Sam Bennett's hopes of taking part have also been dashed as his Net App Endura team were also omitted.

Both teams were on a shortlist revealed in November but the three places have gone to Bardiani-CSF and YellowFluo-Neri Sottoli from Italy and the Colombia squad.

They will join Androni-Venezuela and 18 World Tour teams for the race which starts at the Titanic Quarter in Belfast on 9 May.

Recently, Irvine said participating in the Italian race would be a massive moment for him, but he earmarked an individual medal at the summer's Commonwealth Games as his main objective for 2014.

In November, Irvine claimed the gold medal in the 30-kilometre men's points race at the Track World Cup in Manchester, although he finished 18th in Sunday's scratch race.

Seven months earlier Irvine had suffered a fractured leg in the Tour of Taiwan.