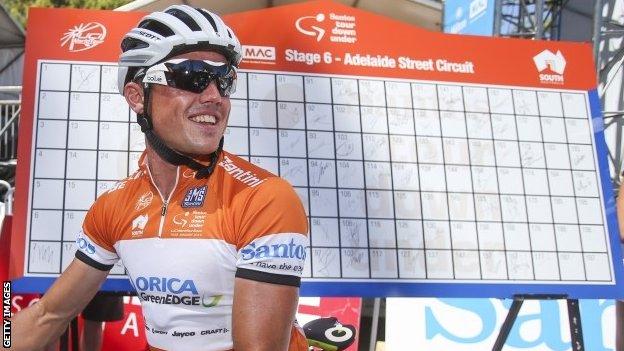 Australia's Simon Gerrans beat Cadel Evans by one second to win a record third Tour Down Under in Adelaide.

Gerrans, who took the race lead on the penultimate stage, finished alongside compatriot Evans after a bunch sprint on the final stage to wrap up victory.

He said: "This is an Australian team, on Australia Day, in a World Tour event. What else could I ask for?"

Thomas, who finished third last year, told BBC Sport before this year's race that he would be trying to help his Australian Team Sky team-mate Richie Porte to victory.

Porte won Saturday's fifth stage to climb to fourth overall - a position he maintained in Sunday's final race by finishing in the main bunch.

Orica Greenedge rider Gerrans, who won the race in 2006 and 2012, also crossed the line in the peloton.

He had won the first stage of the race but lost the lead to Evans on stage three before regaining the leaders' ochre jersey on stage five.

"It's been a hard race for me and my team-mates," continued Gerrans.

"I was confident in my team-mates to take me home safely, which they did. Until I crossed the line, I suspected that Diego Ulissi would try and do something, but it went all right."