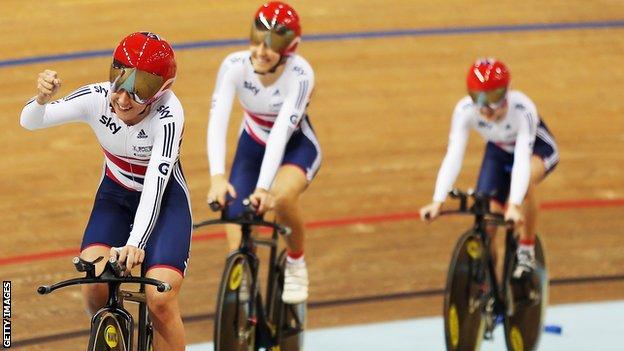 Britain will have a squad of 17 for the World Track Cycling Championship which begins in Colombia on Wednesday.

Five of Britain's gold medallists from last year, including Becky James and Jason Kenny, will defend their titles.

"We can go into the World Championship with confidence," said performance director Sir Dave Brailsford.

Britain claimed a total of nine medals, including five golds, across the team and individual events in Minsk last year.

James became the first Briton to win four medals at a single World Championships when the Welsh rider, now 22, claimed gold in the keirin.

Brailsford sees the championships, which will be held in Cali from 26 February to 2 March, as important milestone in preparations for the Rio Olympics in 2016.

"I'm pleased with the results we've had at World Cup level this season, both from the established riders and the younger ones breaking through," Brailsford added.

"With qualification for Rio 2016 expected to begin this year, this World Championships will allow us to lay down a marker to see where we are at against the best in the world and assess what work needs to be done."