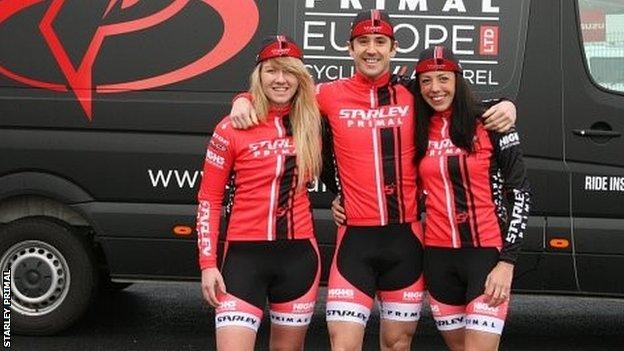 Plymouth-based Starley Primal have been named as one of British Cycling's elite national teams as they look to secure entry into high-profile races for 2014.

They are optimistic of a place in the Tour Series and are also pushing for a wildcard entry to the inaugural women's Tour of Britain.

The team will officially launch at the London Bike Show on 15 February.

As an elite national team, Starley Primal - who run men's and women's teams - have satisfied the sport's national governing body that they have the resources, expertise and finance to compete over the course of the season.

"You have to prove you've got the infrastructure and have essential things like support vehicles and so on," explained Smith.

"It's not easy when you're a team starting out but we are making our way. For everyone, men and women, it's recognition for what we're doing."

Starley Primal are one of four teams to be classified as an elite national team, while five others - including Team Raleigh and Rapha Condor - have the status of UCI Continental teams.

British Cycling say the nine teams will "form the backbone" of the domestic scene this year.

The new classifications were introduced in November 2013 and British Cycling official Jonny Clay explained why the national governing body had created the new system.

"Outside the UCI Continental classification, the difference between a sponsored club and a professional team has been something of a grey area for a number of years," he said.

"We wanted to provide teams who are committed to supporting the sport with a guarantee that they'll have access to the best races in the country.

"At the same time, riders and organisers need to know that they're going to be supported to an appropriate level for the whole domestic season. Elite national team classification helps to do this and gives teams who might aspire to become UCI teams in the future a space in which to grow.

"2014 looks set to be an exciting season for the sport in the UK. Our strength in depth is reflected in the number of events in our national series, the number of teams and the calibre of the riders making up those squads."

Starley Primal have four male riders on salaries for the first time this season, with the other members of the team riding for expenses only as they combine their passion for cycling with day jobs ranging from firefighter to aerospace engineer.

Smith said the culture of cycling - from elite level downwards - would help avoid this disparity within the team becoming a problem.

"Cycling is one of the only sports, if not the only, where people will really sacrifice themselves so someone else can go and win a race," he said.

"You have one person on the podium, but everyone works to get them there and everyone in the team has come into this with their eyes open."

The team will embark on a week-long training camp in Barcelona at the start of March as they continue their preparations for the new season.