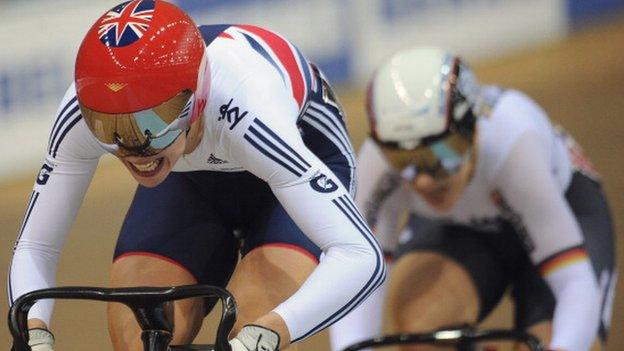 Live coverage of day one of the Track Cycling World Championships from Cali, Colombia.

Great Britain have established themselves as the dominant force in track cycling in recent years, and will have high hopes of returning from Cali with another impressive medal haul.

The British women's team pursuit squad will certainly begin as red-hot favourites - only three months ago they broke their own world record, shaving three seconds off their previous best.

Three-time Olympic gold medallist Jason Kenny will also be in action, and will hope to successfully defend the keirin world title he won in Minsk last year.

Commentary is from Simon Brotherton and Chris Boardman.

Jonathan Edwards introduces highlights of the final day's action at the Track Cycling World Championships in Cali, Colombia, where Britain's Laura Trott began as one of the favourites for the women's omnium.

Trott won two gold medals at the 2012 Olympics, including one in the omnium, but in the corresponding event at last year's World Championships she ended with silver behind the USA's Sarah Hammer.

Trott's partner, three-time Olympic gold medallist Jason Kenny, was also one of the leading contenders in the men's sprint.

You can view all our TV and Red Button broadcasts as well as listen to our radio sports programming on the BBC iPlayer.

The BBC Sport website is available via desktop, mobile, tablet and app, giving fast and easy access to the live stream, text commentaries, news, reports, schedules, videos, as well as highlights of the day's action. The BBC Sport app is available free for Apple and Android devices.

NB Fixtures and event start times are subject to change. The BBC is not responsible for any changes that may be made.