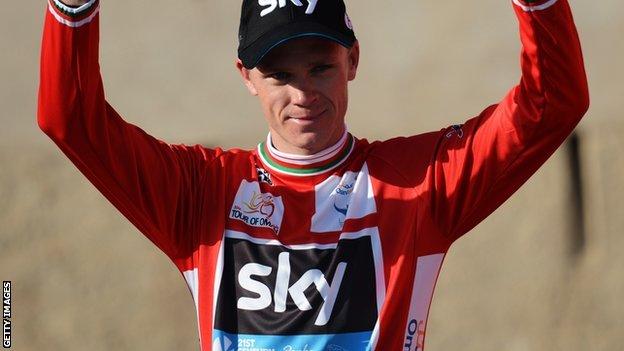 Britain's Chris Froome has won the Tour of Oman for a second successive year.

The Team Sky rider, who took the race lead by winning Saturday's penultimate stage, finished safely in the bunch to maintain his 26-second advantage over America's Tejay van Garderen.

Germany's Andre Greipel won the sprint finish on the final stage in Muscat.

"To get the win was a nice reward for everyone," said Froome. "This has been a good experience as it's the start of my build up to the Tour de France."

The 28-year-old won this event in 2013 as part of his preparations to becoming the second successive British winner of the Tour de France.

And while he was pleased with his form in his opening race of the season, he knows he is still some way from reaching his peak.

"I still feel like I've got a lot of work to do - a lot of room for improvement - but at this stage in the season, I'm where I need to be," added Froome on the Team Sky website.

"I'll travel home to Monaco now and take a few days off before honing my condition again for Tirreno-Adriatico in two weeks."