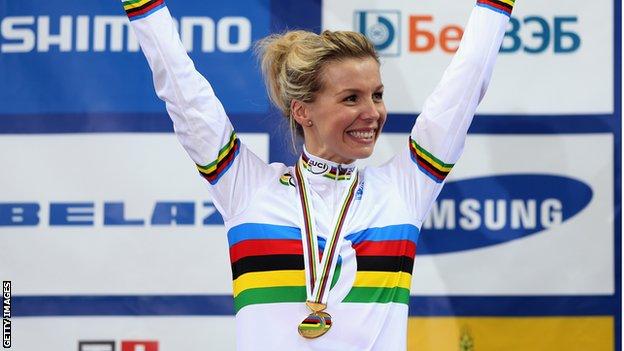 Britain's Becky James is hoping a calm approach will help her defend her two titles at this week's Track Cycling World Championships in Colombia.

James, 22, won the women's sprint and keirin at last year's event in Belarus, and also picked up bronze medals in the 500m time trial and team sprint.

This year's event starts on Wednesday, and James said: "I'm trying to go with the same mindset I had last year.

"Just go in with a completely open mind and not expect anything from myself."

The Welsh cyclist added: "I think that's when I race my best. When I'm enjoying it and I'm most chilled out."

Trott, King and Barker are joined by Joanna Rowsell and Katie Archibald in a five-strong squad for the four-rider 4km team pursuit, which is making its World Championships debut.

Archibald staked her claim for a place by winning European gold on her British debut with Trott, King and Barker in 2013, with the quartet lowering the world record on two occasions.

However, in December, Trott was missing as Rowsell, Archibald, Barker and King set a new world best of four minutes, 16.552 seconds at a World Cup meeting.

Archibald, 19, told the British Cycling website: "It's mad that it's a realistic prospect now because half a year ago, I was scratching at the door trying to get a qualifying time for the Commonwealth Games thinking that was a massive dream and now to be riding for GB, it's amazing."

The British women have won team pursuit gold in six of the seven world championships since its inclusion in 2007 - taking silver in 2010.

A youthful men's team pursuit squad will be led by Ed Clancy, who has won three gold medals and two silvers since 2007.

The 28-year-old is joined by four other endurance riders in the 17-strong British team - Steven Burke, Sam Harrison, Owain Doull and Jon Dibben.

"The team's gelling pretty well this time," said Clancy. "We've spent plenty of time together so it's good to get to know them because I didn't know Owain and Jon so well before this winter. We feel like a proper unit this time."

Clancy will also ride in the two-day six-race omnium - an event he won in 2010 - although he says the priority is the pursuit.

"The team pursuit training takes up 85% of your time," he explained. "We've done little bits of specific omnium training.

"The thing with pursuit is it's a more dependable medal so it makes sense that we put the majority of our effort into that one."