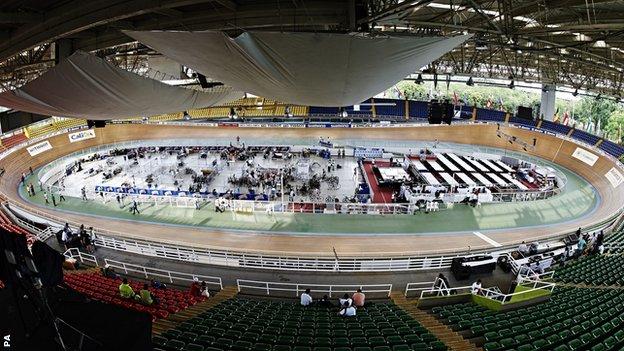 British Cycling head coach Shane Sutton believes his squad can cope with the tricky weather conditions at the World Championships which start on Wednesday.

While there is a roof on the Alcides Nieto Patino velodrome in Cali, Colombia, the sides are open and wind has blown rain onto the track, disrupting the team's build-up to the five-day event.

"I think it'll be OK," said Sutton. "The organisers do everything in their power to make sure everyone competes on a level footing."

Britain go to Colombia in confident mood, with Sutton hoping they can match the nine medals, including five golds, they won at last year's event in Minsk.

"I'd like to think in the Olympic disciplines that we're there or thereabouts, six medals, say," he said. "That's what I would like. But no-one can predict."

However, double Olympic champion Laura Trott believes the conditions will make world records tough to break at the competition, which runs until Sunday.

The 21-year-old will be part of the women's team pursuit squad who have broken the world record six times since the event was lengthened to 4km last year.

But Trott feels that the venue being partly open to the elements may affect her team's chances of setting yet another world record.

The British squad in Colombia

"It is a bit odd having no sides on, as you can have a headwind down one straight and a tailwind down the other," she told BBC Sport. "It might make it harder to set a record."

Trott will ride with fellow London gold medallist Joanna Rowsell as well as 19-year-olds Elinor Barker and Katie Archibald in Thursday's team pursuit qualification with another London champion Dani King set to come into contention for the final.

Performance director Sir Dave Brailsford admits the championships come at an important time in the Olympic cycle with Rio two years away.

"We stop looking backwards, that's gone, it's done," he said. "But you're still far away enough away from Rio to still be able experiment, and look and develop and try different things.

"It's about pushing as hard as we can, but this moment in time, this is going to guide where we are going to go next."