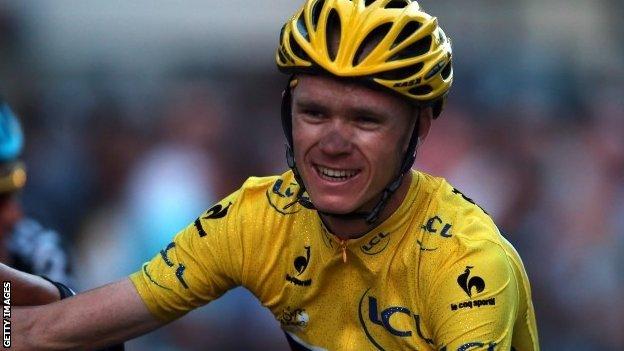 Britain's Chris Froome has withdrawn from the week-long Tirreno-Adriatico stage race with a back injury.

The reigning Tour de France champion is replaced by Richie Porte, who switches from Team Sky's Paris-Nice squad for the race, which starts on 12 March.

"Inflammation in my lower back, so I'll be putting my feet up for a few days on doctors' orders," Froome tweeted.

The Welshman, who will discuss the race in his next column for the BBC Sport website, told BBC Sport: "It's a massive honour to lead Sky in such a big stage race which the team has won in each of the last two years.

"Stage racing isn't something I've targeted before so it's new territory for me, but I'm looking forward to the challenge and getting stuck into the race."

Sir Bradley Wiggins won the Paris-Nice race in 2012 before going on to win the Tour de France.

Porte, who won last year's Paris-Nice went on to play a pivotal role in helping Froome win the 100th staging of cycling's most prestigious three-week race round France.

Team Sky performance manager Rod Ellingworth added: "This is just a minor setback for Chris and we hope he will get back to full training within a week.

"He's obviously disappointed to miss Tirreno-Adriatico but we shouldn't take any chances at this stage of the season."

Froome, 28, got his season off to a good start with a second successive victory in the Tour of Oman in February.