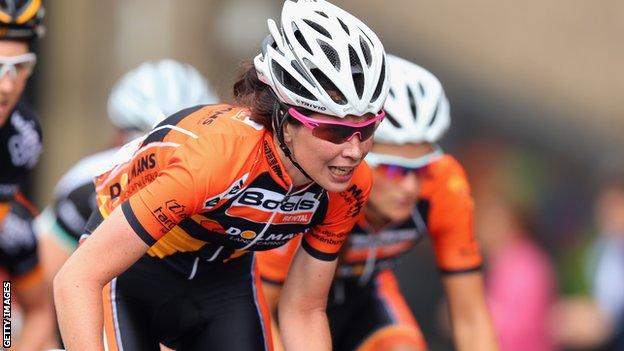 The UK's first professional multi-stage race for women, held mainly across East Anglia in May, will feature some of the world's top teams and riders.

"People said the London Olympics was the best crowd they had ever ridden in front of," Boels Dolmans cyclist Trott, 24, told BBC Essex.

"This could be even better, for five days. That's pretty special."

The Olympic road race and time trials two years ago were watched by an estimated one million people on the roads of central London and Surrey.

The Women's Tour, which will start in Northamptonshire on 7 May and finish in Suffolk on 11 May, has been given a 2.1 rating by cycling's world governing body the UCI - the same as the men's Tour of Britain event.

The Netherlands' reigning Olympic and world road race champion Marianne Vos, 26, has confirmed she will race.

"It's incredible. I genuinely believe every team wanted to come here," said Trott, who has a stage win in the Gracia Orlova to her name.

"They heard about how we would be treated the same as the men - given the same hotels, same prize scheme - it's the first race that has ever done so.

"Cycling in Great Britain is growing and growing, what with the success we've had in the Olympics and worlds.

"It's massive now that finally we take the initiative and we try and change women's cycling for the better."