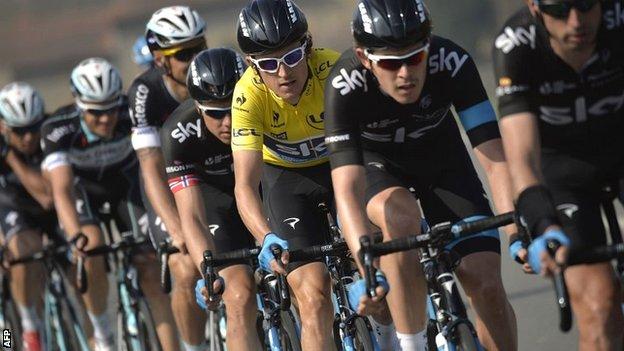 The Welshman, who took the overall lead with second place in Wednesday's fourth stage, finished 16th on Thursday.

The 152.5km stage from Creche-sur-Saone to Rive-de-Gier was claimed by Carlos Betancur, with Luxembourg's Bob Jungels second and Dane Jakob Fuglsang third.

The eight-stage race, won in 2012 by Britain's Sir Bradley Wiggins, concludes on Sunday.

Betancur broke away from the peloton with 9km of the stage remaining and he was quickly followed by Jungels and Fuglsang.

At one point, the leading trio had a 10-second gap, which would have been enough to propel Betancur into yellow.

But the fast-finishing bunch limited the deficit to just two seconds, meaning the Colombian came up five seconds short of the outright lead.

Betancur moved up to fourth in the overall standings while Fuglsang is now sixth at 13 seconds.

German John Degenkolb, the stage three winner, is second, three seconds behind Thomas, while the stage four winner Tom-Jelte Slagter of the Netherlands is a second further back in third.

Thomas is leading the Team Sky squad in France because his team-mate and defending champion Richie Porte has been switched to the week-long Tirreno-Adriatico race in Italy to replace Chris Froome, who is out with a back injury.

However, the 27-year-old admitted he did not expect to maintain his advantage in Friday's 221.5km sixth stage from Saint-Saturnin-lès-Avignon to Fayence.

"A lot can happen," Thomas said. "It's a very long stage and I'd be surprised if I was still in the same place.

"In my mind, riders like [Vincenzo] Nibali or Betancur still remain the favourites, they have more GC (general classification) experience than I do."