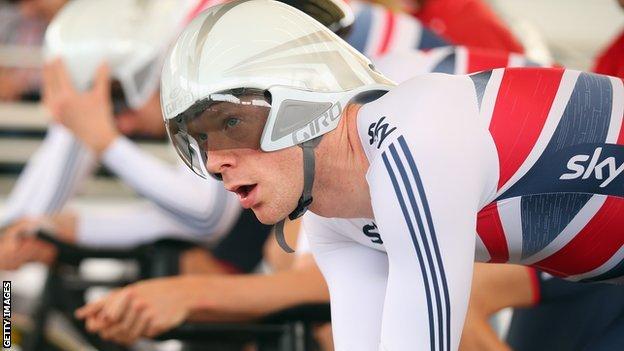 Team GB's track cyclists will be at their best for Rio 2016 despite a below-par performance from the men at the World Championships, according to two-time Olympic champion Ed Clancy.

The men failed to win any medals in Colombia as the women claimed five.

"It will all drop back into place nicely for Rio," insisted Clancy, 29.

"It's a non-Olympic year and we're trying new things. In this case, we tried new things and moved backwards. We won't be trying those things again."

Head coach Shane Sutton was in charge of the team at the World Championships for the second successive year, with performance director Sir Dave Brailsford choosing to concentrate on his other role as Team Sky principal.

Chris Boardman, who won Olympic pursuit gold for Britain in 1992, suggested that Brailsford needed to either fully commit to the track cycling programme or perhaps hand the reins to someone else.

But Clancy said there was no need for a "rearrangement of senior management".

Clancy will compete in the final round of track cycling's Revolution series in London on Friday and Saturday.

It the first major event to be held at the Olympic Park velodrome since the Paralympics in 2012.

"It'll be my first time on the track since I won omnium bronze," said Clancy, who also helped Britain retain their team pursuit title at London 2012.

"The series has been going on for over 10 years. It's been fantastic for track cycling and has grown along with the profile of the sport.

"I ride on the road a lot. Other than competing in the World Cup races and and World Championships, there is not a lot of scope for racing on the track, so this has been good.

"The racing is of a high standard and it's a good place to test yourself."