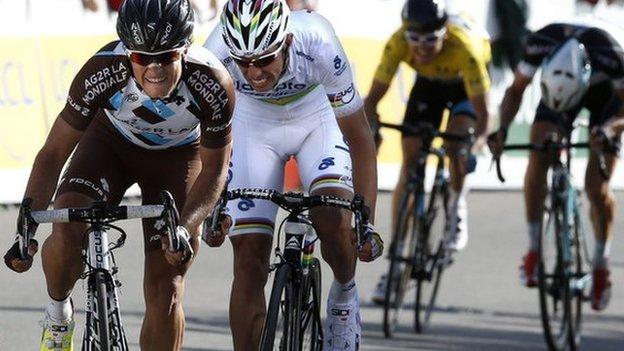 The Welshman, 27, is now eight seconds down on Carlos Betancur, who overtook Portuguese world champion Rui Costa on a steep summit finish to win the stage.

Team Sky rider Thomas, in the race leader's yellow jersey, had led the peloton into the final two kilometres.

But Betancur, 24, avoided a crash 250m from the finish to secure his second straight stage victory.

The Colombian, previously fourth in the overall classification, collected 10 bonus seconds for his win, meaning he overturned his five-second overnight deficit to Thomas.

Thomas, who had clinched overall race leadership with second place in Wednesday's fourth stage, looked strong heading towards the closing stages of Friday's 221.5km race from St-Saturnin-les-Avignon to Fayence.

But after a sharp right-hand turn took the riders to the foot of the day's final climb, the British rider faded as Betancur avoided a crash on the last bend involving AG2R La Mondiale team-mate Alexis Vuillermoz to launch a successful push for the line in the closing 100m.

Thomas recovered to make a late bid to catch Czech rider Zdenek Stybar in third, but ran out of steam after battling a 10% gradient for the final 1200m.

Betancur had said following his victory on the fifth stage on Thursday that this would be the decisive day and so it proved for many riders.

Giro d'Italia champion Vincenzo Nibali attacked on the descent of the Col de Bourigaille in the final 20km but then lacked power on the final climb and lost 41 seconds as he came in 35th.

The riders' climbing legs will again be tested in Saturday's seventh stage, which features five ascents in the 195.5km between Mougins and Biot Sophia Antipolis.

Betancur is not confident he will be able to hold on to the race leadership until the conclusion of Sunday's final stage on the Promenade des Anglais in Nice.

"In the overall standings there are a lot of riders close to me, and I'm starting to feel the fatigue," he said.