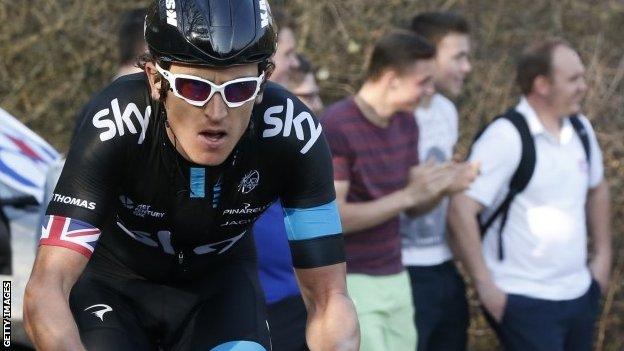 Geraint Thomas's chances of winning the Paris-Nice stage race were ended when he crashed on the penultimate stage.

The Welshman, who was second and eight seconds off the lead, went down 5km from the finish and although he rode on, he lost more than seven minutes.

The AG2R La Mondiale rider leads Costa by 14 seconds going into a tough 128km final stage, which includes five climbs in Provence before arriving in Nice.

Thomas was drafted in as Team Sky's leader for the race when defending champion Richie Porte was sent to the Tirreno-Adriatico race as a replacement for the injured Chris Froome.

The 27-year-old is leading the team for the first time in a stage race but a crash on a downhill left-hand bend undid the good work he had done in the preceding stages.

He was one of three riders who slid into a roadside barrier and although he managed to remount his bike, he crossed the line, with bloodied knees, seven minutes, 12 seconds behind Slagter to drop to 38th in the overall standings.

"Geraint's got multiple bruises and abrasions but we've cleaned him up and he won't need a trip to hospital."