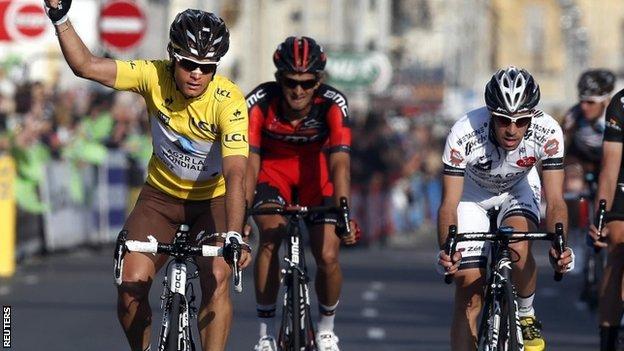 Carlos Betancur has become the first Colombian to win the Paris-Nice race.

The 24-year-old finished two seconds behind stage winner Arthur Vichot but ahead of his nearest rival Rui Costa, who crashed in the final sprint.

The AG2R rider, who took two stages in the week-long race, won by 14 seconds from world champion Costa.

Britain's Geraint Thomas, who took the lead on stage four and was second before he crashed on the penultimate stage, did not start Sunday's finale.

The Welsh Team Sky rider suffered cuts to his legs and arms after coming off his bike with 5km remaining of Saturday's stage and lost more than seven minutes to end his hopes of overall victory.

Thomas missed the final stage as a precaution but it is expected he will be fit to ride in next Sunday's Milan - San Remo race, the first of the one-day Spring Classics.

Betancur was briefly put under pressure by Costa on the Col d'Eze, the final climb of the stage, but he and his team - the first from France to have the winner of the race since Swiss rider Tony Rominger in 1991 - reeled him in.

And in the final, frenetic sprint along the Promenade des Anglais, Betancur managed to avoid a crash 300m from the finish that took out Costa - although the Portuguese retained second overall because the incident occurred inside the final 3km of the stage.

"Who knows I might win the Tour de France one day," said Betancur, who learnt to ride a bike as it was his only mode of wheeled transport to get him to school.

"It is the biggest result of my career. Finishing fifth in the Giro (Tour of Italy) was important but this is on another level. This victory is something else entirely."