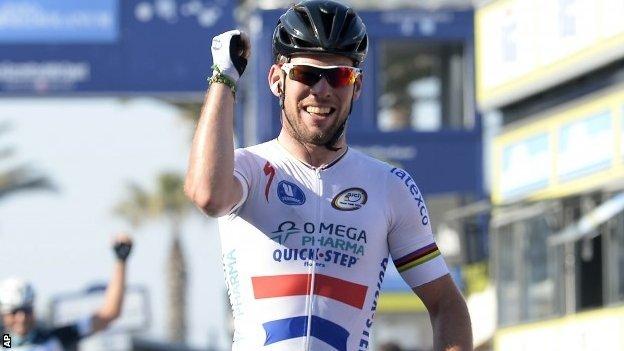 Mark Cavendish sprinted to victory on the penultimate stage of the Tirreno-Adriatico road race in Italy.

"I'm incredibly happy," said Cavendish, 28. "We had one goal - win the sprint - and that lead-out was fast, technically perfect and bodes well for the future."

Cavendish, who led the race after winning the team time trial on the opening stage, is due to compete in the Milan-San Remo one-day race on Sunday - the first of the season's Spring Classics - a race he won in 2009.

And although two of his main rivals, Marcus Kittel and Andre Greipel, did not contest the final sprint in Porto Sant'Elpidio after 189km of racing, Cavendish still showed the turn of pace which has helped him win more than 100 races.

Kittel had been dropped on an earlier climb and was unable to catch the main bunch on the run-in, while Greipel was hindered by a crash involving his Lotto Belisol team-mates in the final kilometre.

Unaware of the carnage behind them, Cavendish's lead-out train delivered him to within 200m of the finish line and he emerged from Petacchi's slipstream to cruise over the line in four hours, 16 minutes and 15 seconds.

"I hope everyone who crashed is all right," added Cavendish, who also admitted that he felt as "worse as I have ever done on a bike" during Sunday's stage, which finished at the top of an ascent that featured gradients of 30%.

Contador, who won that stage, holds a seemingly unassailable lead with just a 9.1km time trial to come on Tuesday's final stage.