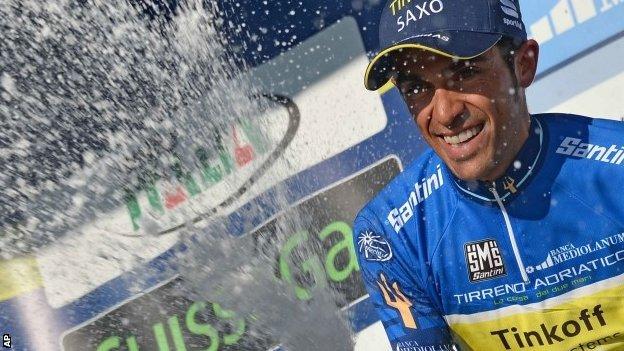 Bradley Wiggins finished third in the concluding 9.1km time trial stage of the Tirreno-Adriatico race, which was won overall by Alberto Contador.

Spain's Contador finished 41 seconds back but won the race by two minutes and five seconds from Colombia's Nairo Quintana, with Roman Kreuziger third.

Stage winner Italian cyclist Malori said: "It's the most beautiful victory in my entire life. I can't still believe myself.

"It's a reward to the efforts made for so many years."

Movistar rider Alex Dowsett finished sixth to ensure there were two British riders in the top 10.

It was the first overall race victory for Contador, who took the lead on stage five, since he won the 2012 Vuelta a Espana.

Contador, the 2007 and 2009 Tour de France winner, and current Tour champion Chris Froome will both compete in the Tour of Catalunya next week.

Briton Froome, 28, withdrew from the Tirreno-Adriatico before the start of the competition with an inflammation in his lower back.