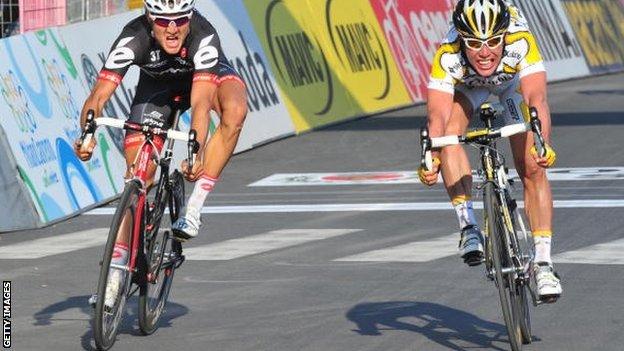 Mark Cavendish has played down his chances of winning a second Milan-San Remo title in Sunday's opening race of the Spring Classic season.

The 300km race across northern Italy is referred to as the 'sprinter's classic' because of its generally flat terrain.

However, Isle of Man rider Cavendish, winner five years ago, said: "I'm not in the same form as I was in 2009.

It's the only Classic the sprinters can do

"It's a long race and the easiest to finish but hardest to win because every one of the 200 starters has a chance."

Cavendish goes into the race, which is the first of the seven over the coming six weeks that make up the Classics, on the back of a stage win in last week's Tirreno-Adriatico.

But he concedes that the unpredictable nature of the one-day races - last year's Milan-San Remo was shortened by 50km because of snow - makes them harder to win.

"There are so many variables, that's what makes it beautiful," continued the 28-year-old, who rides for Omega Pharma - Quick-Step.

"Just because a sprinter wins, it doesn't make it an easy race. In 2009 I had to change my whole winter's training and my body shape, just to focus on that one race.

"There's no other Classic like it. There is no other race in the world in which every starter has a chance.

"It's the only Classic the sprinters can do - if things go right they've got a chance."

In an effort to make it harder for the sprinters' teams to set up a finish that suits the fast men, organisers had added a third climb to the final 30km, however, that hill has now been removed after snow and rain damaged the road over the winter.

That leaves just the Cipressa and Poggio climbs to negotiate and German sprinters Andre Greipel, of the Lotto Belisol team, and Giant rider Jon Degenkolb, are expected to be in the final shake-up if it does come down to a sprint finish at the end of more than six hours of racing.

However, riders like 2008 winner Fabian Cancellara and last year's runner-up Peter Sagan of Slovakia are likely to ramp up the pace on the ascents of Cipressa and Poggio to increase their chances of victory.

"A more exacting course would have been welcome," said Luca Guarcilena, Cancellara's team manager at Trek. "We have to find a way to make sure the race doesn't finish in a bunch sprint."

Sagan is one of a few riders who are able to mix it with the sprinters but then leave them behind when he road goes uphill.

"I've done what I can to make sure I'm in top form," said the 24-year-old, who, like Cavendish, also won a stage at last week's Tirreno-Adriatico.

"My results so far have been good. Milan-San Remo has always been one of my most objectives of the season."