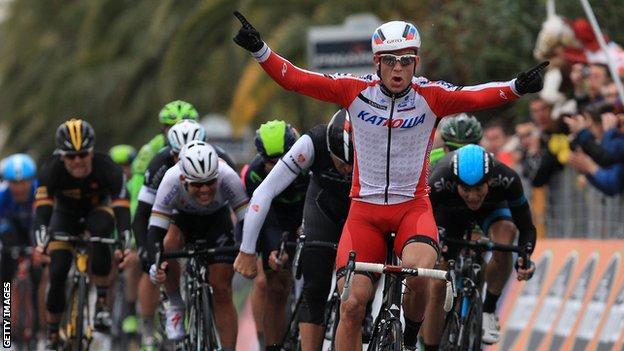 Mark Cavendish, of the Isle of Man, finished fifth in the 299km race.

"It's the race that I've looked at in the past and dreamed about over the years," Swift told teamsky.com.

"It's the one big race where I could see myself getting a result because normally that sort of terrain is where I'd have pretty good legs.

"So to go there and do that today was a really great feeling."

It was the best performance of his career for Yorkshireman Swift, who is hoping to bounce back from last year's injury-hit season.

Cavendish, who led the race going to the line, ran out of energy in the last few metres after racing for nearly seven hours in cold and wet conditions in northern Italy.

Kristoff, who won Olympic bronze in the London 2012 road race, claimed his second win of the year and the biggest of his career.

He praised team-mate Luca Paolini for helping him get to the line and said: "It was a fantastic victory. I was hoping for a top 10 finish. To win is incredible.

"Normally I don't lose too much power if it is long. I was trying for the win and I am happy that I could take it."

Cancellara, who won this race in 2008, questioned the race organisers' decision to remove the Pompeiana climb, placed between the Cipressa and Poggio in the final 30km, that would have made it harder for the sprinters to contend victory.

After claiming his third runner-up spot, the Swiss rider said: "Following wheels for 250km is not the kind of Milan-San Remo I like.