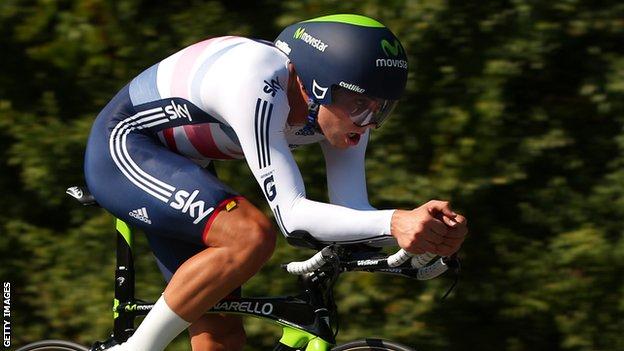 The 25-year-old achieved third and sixth-place finishes in the recent Tirreno-Adriatico time trials.

"With this last week I feel I'm going very much in the right direction to earn a place," he told BBC Essex.

"I know the team are keen for me to be on the tour. They think I'm ready for it and it's a natural progression from the Giro d'Italia last year."

He continued: "At the moment we're the best team in the world. There are 27 guys on Movistar and nine go to the Tour. It's fiercely competitive."

The Maldon-born cyclist is also a useful rider to have leading out sprints, and the opportunity to take on the Tour de France in July in the same year as it runs through his home county of Essex would make it doubly special for him.

"With the Tour starting in England and coming through Essex, it's a once in a lifetime opportunity for me," he said.

"I missed out on the London Olympics, so don't want to miss this one as well."

Dowsett struggled towards the end of last year, coming a disappointing 41st in the world championship time trial, and continued that form early this year in the Dubai Tour.

But a change in approach saw him improve in the Volta ao Algarve and then the Tirreno-Adriatico.

"I feel like I've turned a corner lately. I've changed a few things in training and my lifestyle," said the former Team Sky rider.

"It seems to have made a difference. I was very competitive in the final time trial in the Tirreno. I was sixth but the calibre was similar to a world championships and the good news is there is more to come.

"I felt I wasn't performing to the level I knew I could. I knew I wasn't doing something right.

"I wasn't really being specific enough with my training. I was just going out and riding as hard as I could - that wasn't the most sensible thing."