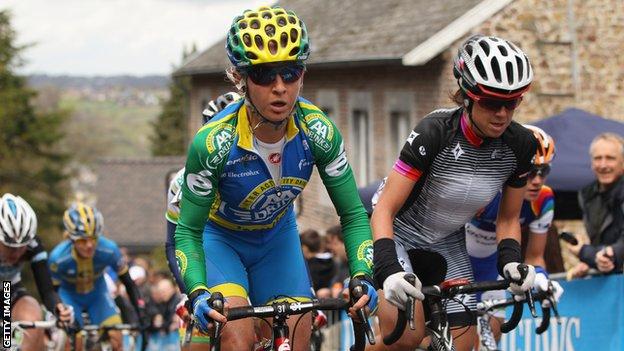 The Women's Tour, in May, brought the world's best riders to England for five days, while a new one-day race in Paris this weekend runs alongside the final day of the men's Tour de France.

Here, BBC Sport highlights how the races so far have unfolded, and picks out the riders and teams to watch for the rest of the year.

Sweden's Emma Johansson won the second World Cup race of the year, on the banks of Lake Maggiore in Italy ahead of Olympic silver medallist Armitstead, with Belarus' Alena Amialiusik in third.

Dutch rider Ellen van Dijk won the event widely considered the biggest women's one-day race outside the Olympics or World Championships, which also doubles as the third leg of the World Cup.

The most prestigious stage-race in women's cycling was won by Marianne Vos. Britain's Emma Pooley showed her climbing abilities by winning three of the eight stages, including the final summit finish at Magreglio after ascending the famous Madonna del Ghisallo.

Marianne Vos was again triumphant on a 13-lap 91km race around the French capital that started and finished on the Champs-Elysees, hours before the men's Tour de France reached its climax. The Dutch world and Olympic champion won a sprint finish, edging out compatriot Kirsten Wild. Britain's Lizzie Armitstead had been up with the leading bunch but crashed in the final kilometre.

The women's time trial takes place on 31 July on a 30km course taking in East Dunbartonshire and North Lanarkshire as well as Glasgow's East End. The road race follows on 3 August and involves seven laps of a 14km circuit of the city. Official website:

Lucy Garner (GB - Giant-Shimano): "I'm really looking to get selected for the Commonwealth Games. Nationals last year were on the same course and it's really tough, but I feel like I'm in good shape for it.

"It's a bit like the feel of the Olympics - I went to the Youth Commonwealth Games and that was amazing. I'd love to be able to race in Glasgow."

Lizzie Armitstead (GB - Boels-Dolmans): "The Sweden World Cup is a massive race for me and our Boels-Dolmans team. This is the first year that the team I'm with will really be targeting the World Championships, so the team time trial here will be a big test for us."

Lucy Garner (GB - Giant-Shimano): "We're not certain what the course will be like, but I'm guessing it will be hilly. It all depends on the climbs but I think Lizzie Armitstead has a really good chance - she's already having such a good season."

Lizzie Armitstead (GB - Boels-Dolmans): "This is our team goal for the season. We didn't have a strong enough team last year, but this year we are specifically preparing for it. It's nice to be going into a World Championships and going for the win."

Turning 27 in May, Vos is widely regarded as the greatest female cyclist of her generation, if not of all time. She won the London 2012 road race and has hthree world road gold medals to her name, alongside world titles in cyclo-cross and track cycling.

Armitstead, 25, won Olympic silver in the road race at London 2012. She had four podium finishes, including two victories, in the opening month of the 2014 season.

Johansson, 30, led the world rankings in 2013 and has twice won the Thueringen Rundfahrt stage race, alongside road race silver at both Beijing 2008 and last year's World Championships.

Pooley, 31, won the time trial world title in Melbourne four years ago having taken Olympic time trial silver at Beijing 2008. She also has two world bronze medals to her name.

Still only 19, Garner won back-to-back junior road world titles in 2011 and 2012 before recording her first senior victory on the Tour of Chongming Island's opening stage in 2013.

Barnes, who turns 21 in May, won her first race with the UnitedHealthcare team when she took the opening stage of Argentina's Tour de San Luis in January, but crashed out a day later.

Wild, 31, is a leading track cyclist and a sprint specialist on the road.

Lucy Garner (GB - Giant-Shimano): "This year we're very, very strong. We've got a lot of different styles of rider - Claudia Hausler, from Germany, has won the Giro d'Italia and is a great hill climber. In the mountains she will be one to watch.

"We've also got Kirsten Wild, who I think is the best sprinter in the world right now. But we've also got young riders coming through as well."

Emma Johansson (Swe - Orica-AIS): "We have a great group, I love spending time with my team. It's easy to forget how to have fun, but with my team, it's really relaxed. Anyone who walks in on us would never guess we're athletes, we have a lot of fun off the bike. But when we're racing, it's serious and we're really professional.

"We have two riders from Holland and one from Italy, and the rest are all Australian girls. It's quite a big group of Aussies - but we're coping."

Lucy Garner (GB - Giant-Shimano): "Rabobank are always there, even when Marianne is not in the team. They're always making the race so, so hard. A lot of attacks come from them."

Sarah Connolly (women's cycling writer): "This American team are really good on social media and full of interesting characters. Kristy Scrymgeour, who runs the team, started as a cyclist, then became a journalist and press manager for HTC-Highroad. When the men's team folded, she kept the women's team going.

"Evelyn Stevens worked on Wall Street before giving up her job to become a pro cyclist. The team boasts attacking, fun riders who go for teamwork. They've been the team time trial superstars for the past couple of years."

Sarah Connolly (women's cycling writer): "The team is run by Rochelle Gilmore and registered in England - it includes the likes of Laura Trott, Dani King and Joanna Rowsell, but you will rarely see the British riders in Wiggle's European road races. They spend their time riding the track.

"Last year, Italian rider Giorgia Bronzini won something like 20 races, but she takes a while to warm up and doesn't really like riding in the cold."

HOW TO WATCH THE ACTION

World governing body the UCI will upload highlights from each of this season's World Cups to YouTube, while the World Championships will be televised by BBC Sport.

Watching many other races remains difficult, with live streaming patchy and often restricted to one country if available at all, though some inventive approaches have been used in the past.

"The Sweden World Cup organisers set up brilliant home-made live streaming," recalls Sarah Connolly, who writes and podcasts about women's pro cycling. "They had a live ticker on their website, radio commentary and a little GPS tracker, with two fixed cameras on top of the hill and at the finish line. It was the most lovely, done-on-the-cheap streaming."

Emma Pooley says: "The TV coverage of the World Cups is a really important step. When fans - or non-fans - get to see women's cycling on TV, they love it."