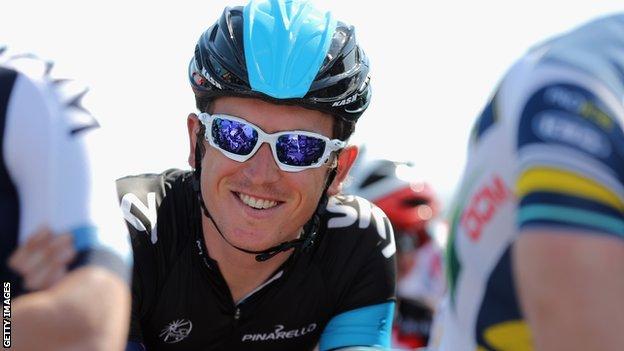 The Team Sky rider launched himself from a four-man breakaway within sight of the line but was beaten to the finish by Niki Terpstra and Sagan.

I gave it everything. That's all I had and I'm pretty happy with that"

"Heading into the final with two Quick-Steps and Sagan it was pretty tough," Welshman Thomas told the Team Sky website. "I rode it as best I could."

In a demanding race marred by crashes, defending champion Fabian Cancellara was one of several riders to be held up 30km out from the finish.

With 25km to go Thomas broke away from the main bunch on a steep cobbled incline and only Terpstra, Vandenbergh and Sagan could follow.

Each rider tried to break clear of Sagan, whose sprinting prowess made him the group's most likely winner, but each was clawed back and the Cannondale rider easily outpaced his rivals to the line.

"Going up the Kwaremont I thought I'd just get stuck in and attack," Thomas said. "You never know if you don't see what happens.

"Unfortunately Terpstra got round me on the line but I gave it everything. That's all I had and I'm pretty happy with that."

Welshman Thomas, 27, will look to carry his good form into Sunday's Gent-Wevelgem, a one-day spring classic to be held in the Flanders region of Belgium, where defending champion Sagan, 24, will be favourite.