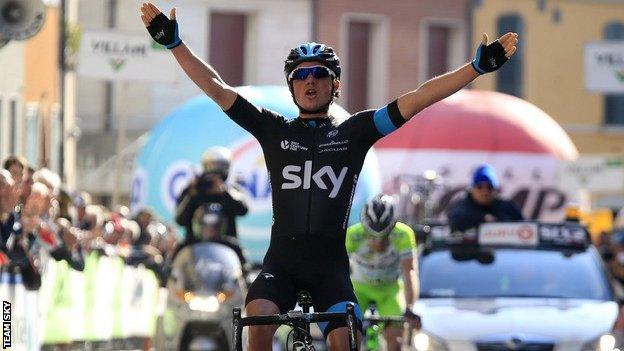 The Manx rider, 24, finished 22nd on the final time trial to top the general classification by 12 seconds ahead of his Team Sky team-mate Dario Cataldo.

Cataldo won the final day's 10km individual time trial to make it a one-two for the British team.

It's like being in dreamland. To win four out of five stages is not a common thing to do but the team was super strong this race

The victory is the Isle of Man cyclist's first stage-race triumph of his professional career.

He later said on Twitter: "Was a nervous time trial yesterday with my tri bars coming loose but nice to finally finish it off and also have Dario on the podium with me."

The British team dominated the race after Isle of Man-based Ben Swift won the opening stage on Thursday before a quartet of Team Sky riders won the afternoon's time trial.

Kennaugh recorded the first stage win of his career on Friday and the Manxman did not relinquish the leader's jersey.

Team Sky director Dan Frost said: "It was a perfect end to a perfect week for us.

"It's like being in dreamland. To win four out of five stages is not a common thing to do but the team was super strong this race.

"Now having Dario win the trial and to move up to make it a one-two overall is also a really nice result. We won the points jersey with Swifty, the team classification and it was really nice to see Pete take the overall.

"It is great for morale going forwards."