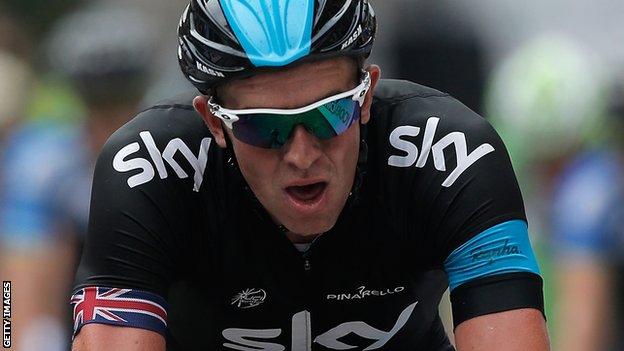 Team Sky's Ian Stannard has fractured a bone in his back and will miss the Tour of Flanders and the Paris-Roubaix race later this month.

The Briton crashed into a deep ditch after touching wheels with a fellow competitor during Belgium's Ghent-Wevelgem race on Sunday.

The 26-year-old is to have a scan on his thoracic vertebra.

"You can't rush an injury like this," the Chelmsford rider told Team Sky's official website. "I've got to rest."

Stannard, who will see a specialist this week, started the season by winning the Omloop Het Nieuwsblad.

He added: "Once I've spoken to the specialist, I'll have a better idea of what I can and can't do. Then I'll be able to focus on my recovery."

He said he was gutted to be missing the Tour of Flanders and Paris-Roubaux.

"It's going to be really hard to watch them on TV," he said.

"To be honest, I haven't had time to really think about it yet because it's been pretty painful 24 hours. They are only bike races at the end of the day and there'll be plenty more chances to ride them in the future."