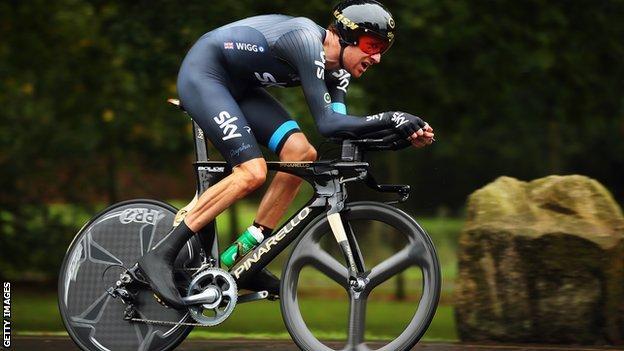 The 2012 Tour de France winner Sir Bradley Wiggins will ride in the Tour of Flanders on Sunday as Team Sky's replacement for Ian Stannard.

Stannard, who broke a vertebra at Gent-Wevelgem on Sunday, will also miss the Paris-Roubaix race on 13 April.

The 255km (158-mile) Tour of Flanders is the second of this year's five one-day Monument races and includes 17 short climbs and 17 cobbled sections.

Wiggins will tackle the event for the first time since 2005.

The 33-year-old, who has won seven Olympic medals, will be joined in the eight-man squad by fellow Britons Geraint Thomas and Luke Rowe.

Wiggins, who is also expected to participate in the Paris-Roubaix, recently announced he will compete at the Commonwealth Games in Glasgow this summer, a week after finishing the Tour de France.

Double Olympic gold medallist Thomas is set to lead the Team Sky challenge at the Flanders and Paris-Roubaix races.

Thomas said: "[The Tour of Flanders] is my favourite race and probably the classic that is suited to me the best.

"I was 10th three years ago and definitely feel I am a lot better now. So, if I can get a bit of luck and ride it well, I have got a good chance."