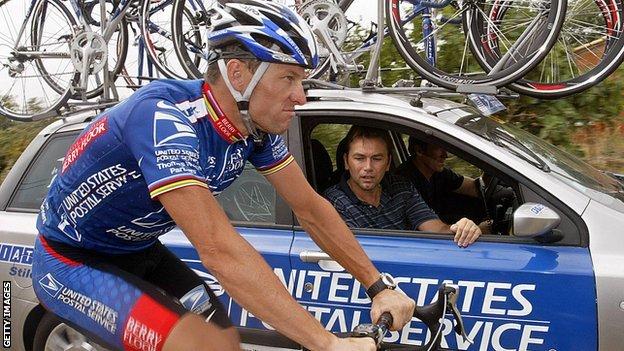 Lance Armstrong's former cycling team manager, Johan Bruyneel, has been banned for 10 years for his involvement in doping.

The trio all worked for Armstrong's US Postal Service team (USPS).

American Armstrong was stripped of his seven Tour de France titles and given a lifetime ban for doping in 2012.

He finally admitted using banned substances in a television interview with Oprah Winfrey in January 2013.

"The evidence establishes conclusively that Mr Bruyneel was at the apex of a conspiracy to commit widespread doping on the USPS and Discovery Channel teams spanning many years and many riders," said a Usada statement.

"Similarly, Dr Celaya and Mr Marti were part of, or at least allowed themselves to be used as instruments of, that conspiracy."

Usada's 2012 report said the USPS team had run "the most sophisticated, professionalised and successful doping programme the sport has ever seen".

Bruyneel, who worked with Armstrong at the US Postal and Discovery Channel teams, was widely implicated in Usada's report but took his case to a three-person arbitration panel in London last December and was banned until 11 June, 2022.

A former professional cyclist, Bruyneel was team manager for all of Armstrong's seven Tour de France wins from 1999 to 2005.

The Belgian enjoyed further success with Astana before moving to run the RadioShack team, a position he resigned from when Usada published its report into Armstrong's doping.

"I do not dispute that there are certain elements of my career that I wish had been different, nor do I dispute that doping was a fact of life in the peloton for a considerable period of time," the 49-year-old said in a statement on his website.

"However, a very small minority of us has been used as scapegoats for an entire generation.

"There is clearly something wrong with a system that allows only six individuals to be punished as retribution for the sins of an era."

Bruyneel said he continued to dispute Usada's jurisdiction over him and might still appeal to the Court of Arbitration for Sport.