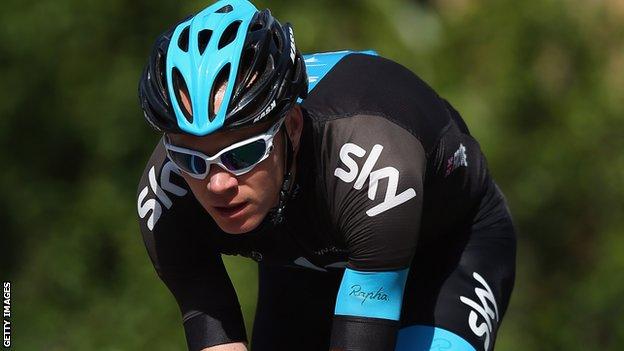 Britain's Chris Froome has pulled out of Sunday's Liege-Bastogne-Liege race because of illness.

Froome, the 2013 Tour de France champion, has not raced since the end of March, when he finished sixth in the Tour of Catalonia.

The Liege event is the seventh and final one-day Spring Classic in the cycling calendar.

Team Sky hope Froome will recover from his illness to compete in the Tour de Romandie, which starts on Tuesday and is regarded as a crucial step in Froome's preparation for July's Tour de France defence.

"After an examination this morning [Sunday] we concluded that the best course of action would be to withdraw him from Liege-Bastogne-Liege as a precautionary measure.

"That will allow him the best chance of recovery ahead of the Tour de Romandie."

The 28-year-old started the season in fine form, winning the Tour of Oman in February for the second year in a row, but has since been troubled by injury and illness.

Froome was also ruled out of the Tirreno-Adriatico race in March due to a back problem before making his comeback in the Tour of Catalonia, where he struggled for form.