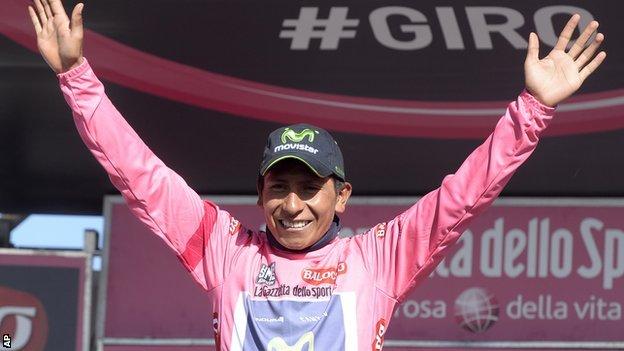 Nairo Quintana won two stages of the Giro d'Italia as he became the first Colombian to win the race.

Victory in a gruelling 16th stage was decisive, as the 24-year-old Movistar rider turned a deficit of two minutes 40 seconds to Omega Pharma-Quick-Step's Rigoberto Uran into a lead of 1:41.

The 97th edition of the Giro started in Belfast, with three stages in Northern Ireland and the Republic before switching to Italy.

Australia's Orica GreenEdge are victorious on the opening day, with Svein Tuft taking the race lead on his 37th birthday. Rigoberto Uran and Cadel Evans fare best of the pre-race favourites, with their teams second and third respectively, but Ireland's Dan Martin crashes, taking out several team-mates with him and injuring his right shoulder.

Germany's Marcel Kittel powers away from his sprint rivals to become the 84th man to win a stage on each of the three Grand Tours. Britain's Ben Swift figures in the final sprint and finishes seventh. The race favourites spend a wet and windy day in the shelter of the peloton. Australia's Michael Matthews is eighth and takes the race lead from Orica GreenEdge team-mate Svein Tuft.

Britain's Ben Swift is cruelly pipped to the line by Germany's Marcel Kittel, who celebrates his 26th birthday with a second consecutive stage victory after timing his sprint to perfection. On another damp and blustery day, the race crosses from Northern Ireland to the Republic with the overall favourites staying out of trouble in the peloton.

Nacer Bouhanni becomes the first Frenchman in three years to win a Giro d'Italia stage when he sprints to victory in wet conditions. The FDJ rider survives a late puncture and then holds off the challenges of Trek's Giacomo Nizzolo and Giant's Tom Veelers to win the stage. German Marcel Kittel, winner of two of the first three stages, pulls out of the race because of a fever.

Australian Michael Matthews extends his lead to 21 seconds as he avoids a late crash that scattered the field to win the stage. Matthews is followed home in a small group by compatriot Cadel Evans, who is now his closest rival in the general classification.

FDJ's Nacer Bouhanni claims his second stage win of the Giro d'Italia, but Australian Michael Matthews holds on to the leader's pink jersey. Bouhanni, making the most of dry roads, keeps his composure on a technical finish to grab victory by half a wheel.

Former Tour de France winner Cadel Evans opens up a 57-second lead in the General Classification after Italian rider Diego Ulissi climbs to his second stage win of this year's race. Evans takes the 'maglia rosa' from compatriot Michael Matthews, who is dropped on the first category one climb of the race after a week in pink.

Cadel Evans maintains his 57-second lead in the race after pushing up the pace in the final 40 kilometres of the mountainous stage nine. Dutchman Pieter Weening is rewarded with a second Giro stage win of his career after powering out of the leading group with Davide Malacarne before the final climb.

Australian Michael Rogers attacks on a downhill section 20km from the finish to win his first Grand Tour stage. His compatriot Cadel Evans continues to lead Rigoberto Uran by 57 seconds in the overall standings.

Italian Marco Canola delights the home crowds by leading home a breakaway victory after the sprinters leave it too late to chase the three escapees down. Colombia's Rigoberto Uran finishes safely in the peloton to retains the overall race lead

Italy's Enrico Battaglin proves the strongest on the cobbles as he passes compatriot Dario Cataldo of Team Sky in the final 20m of the stage. Race leader Rigoberto Uran struggles on the ascent to the finish though as pre-race favourite Nairo Quintana reduces his deficit by 25 seconds to three minutes, four seconds. Cadel Evans remains second after also beating Uran and now trails the Colombian by 32 seconds.

A third successive Italian stage win for the home fans to cheer as Fabio Aru wins the race to Plan di Montecampione. The climbing specialist attacks in the closing kilometres of the uphill finish, leaving race leader Rigoberto Uran in his wake. Race favourite Nairo Quintana claws back more time on Uran, who now leads second-placed Cadel Evans by more than a minute.

A day of drama in the snow-capped mountains ends with pre-race favourite Nairo Quintana taking the race lead. The Colombian takes advantage of confusion on the descent of the Stelvio before powering up the final climb of the day to overhaul Rigoberto Uran and he now leads the race by 101 seconds.

A rare day for a successful breakaway as five riders are allowed to build a lead of more than 12 minutes. Stefano Pirazzi then breaks clear in the final kilometre to race to victory. Race leader Nairo Quintana finishes in the main bunch, alongside his main rivals for the overall race win, to retain the pink jersey.

A day of glory for Colombia as Julian Arredondo joins a group that breaks clear with around four kilometres to go and wins by 17 seconds from compatriot Fabio Duarte. Fellow Colombian Nairo Quintana retains the leaders pink jersey but it's a bad day for Australian Cadel Evans, who drops from third to ninth in the general classification.

Nairo Quintana tightens his grip on the race, reeling in his opponents to finish 17 seconds ahead of Fabio Aru. In the process, Quintana extends his lead in the general classification over Rigoberto Uran to three minutes and seven seconds, a daunting prospect for his fellow Colombian with only two stages remaining.

Nairo Quintana moves to the brink of race victory after maintaining his lead over fellow Colombian Rigoberto Uran. Australia's Michael Rogers wins the stage ahead of Italy's Franco Pellizotti. Another Italian, Francesco Bongiorno, is third after being pushed by a spectator in the closing kilometres.