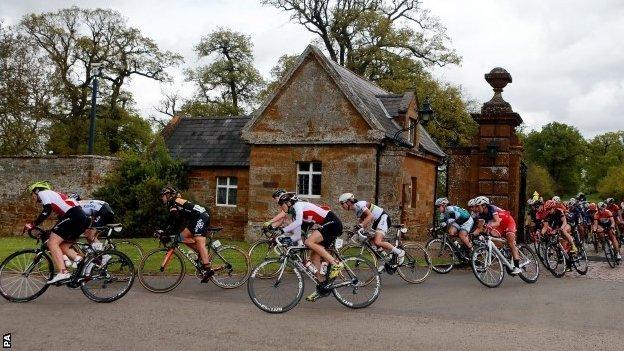 Sweden's Emma Johansson fought off Olympic champion Marianne Vos and Great Britain's Hannah Barnes in a sprint finish to win the first stage of the inaugural Women's Tour of Britain.

The Tour of Britain is bringing the world's leading women's cyclists to the streets of Britain for the first time since the London 2012 Olympics.

Eleven of the top 14 professional women's teams, with a total of 96 riders, are competing in the five-day event, which will finish in Bury St Edmunds on Sunday.

BBC Sport's Nick Hope, who is covering the event from the roadside, said indifferent weather did not stop the crowds flocking to watch the race.

"Today was the perfect start with literally thousands lining the streets - including many children - despite the occasional showers," said Hope.

"Olympic champion Marianna Vos and race winner Johansson both admitted they were shocked by the support and it was special to witness."

Johansson, who rides for the Orica AIS team, has been in good form this season, registering top-three finishes in two of the four World Cup events so far.

"I don't have great memories of racing in England, but this was great," said Johansson, who finished sixth in torrential rain in the London 2012 road race.

"It was a long sprint into a head wind. I knew Lizzie and Marianne were going to be up there so I was watching them, but the crowds were crazy.

"I did get a bit scared as I was not used to it and thought there may be a crash but they were just excited."

For some time it seemed that Elise Delzenne was a more likely winner after her daring solo breakaway opened up a lead of 45 seconds with around 15km of the 93.8km stage from Oundle to Northampton remaining.

However, the French national champion was reeled in with less than 2km to go as Armitstead's Boels-Dolmans team drove the chasing pack along crowd-lined streets.

After losing out in the sprint finish, Armitstead revealed that the volume of the support had made her think she was closer to the finish than she was.

Teenager Lucy Garner, a two-time junior road champion, ensured a third Briton in the top ten alongside Armistead and Barnes with a sixth-place finish.