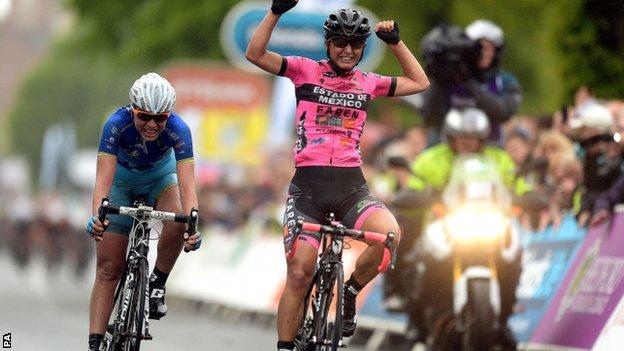 Lucy Garner, who raced through her home village Cosby during the stage, was the first British rider home in fifth.

Lizzie Armitstead was seventh and is the overall best-placed British rider, 14 seconds back with three stages left.

Olympic silver medallist Armitstead is fifth after the opening two stages, one place and one second ahead of Hannah Barnes, who also finished in the main bunch and was credited with the same time as third-placed Vos.

Garner, who is 10th overall after following Dutch rider Amy Pieters over the line, tweeted: "Can't believe all the support I got on the stage today. What an amazing feeling being able to race through my home village. Thanks everyone!"

Estado de Mexico Faren rider Ratto, 20, broke away from the peloton early on in the 118.5km race from Hinckley but was eventually caught by her compatriot Zorzi before taking the win as the duo held off the chasing pack.

Ratto leads Zorzi by five seconds in the overall standings, with Vos a further second back in third.

Stage one winner Emma Johansson of Sweden was 11th and drops to fourth overall, seven seconds back.