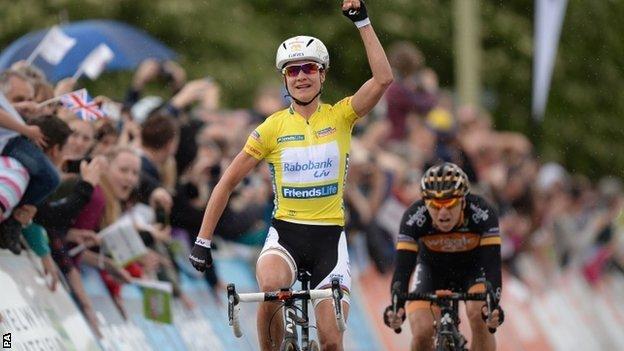 Marianne Vos won stage four of the women's Tour of Britain to extend her overall lead in the race to 19 seconds.

Double Olympic track champion Laura Trott was allowed to race despite being taken to hospital with suspected concussion after crashing on Friday.

She and 24-year-old sister Emma - who announced she will retire after Sunday's final stage - led the riders out of their hometown Cheshunt at the start of the 87.8km race to Welwyn.

The pair finished 29th and 58th respectively, with Laura Trott admitting she was still suffering the effects of her collision the previous day.

"I think the crowd carried me around and their support was incredible," she told BBC Sport.

Considered a pre-event favourite for stage wins, Bronzini has struggled to make an impact because of illness.

She was third on Friday, though, and was adamant the incident with the official motorbike denied her the chance of beating Vos on Saturday.

"It's not my favourite way to finish, but it happened," Wiggle Honda rider Bronzini told BBC Sport.

Her team-boss Rochelle Gilmore added: "It was about 400-500m from the finish and the motorbike apparently came between Bronzini and Vos, which is quite disappointing because it messed up the sprint."

Vos, who rides for Rabo-Liv, was unaware of the incident as she was ahead at the time.

"Beating Bronzini is a nice feeling and to being in yellow made me really motivated for that," she told BBC Sport.

London Olympic silver medallist Lizzie Armitstead remains the leading British cyclist in the overall standings, despite suffering a punctured tyre for the second day in a row.

Armitstead finished 10th on the stage but, despite being credited with the same time as Vos, dropped 30 seconds behind the race leader, who picked up time bonuses on the stage.

Fellow Briton Sharon Laws leads the 'Queen of the Mountains' standings ahead of Sunday's finale, which takes the riders from Harwich to Bury St Edmunds.