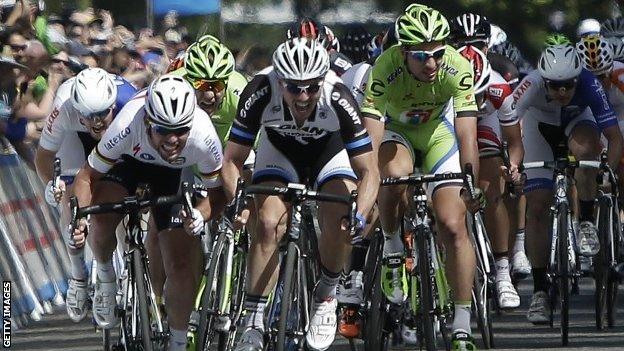 Mark Cavendish admitted he was not sure whether he had edged a thrilling sprint finish after winning the Tour of California's first stage in Sacramento.

The Manxman, said: "This is the first time in my career I really had no idea. I had to wait a little bit until they confirmed. So, I'm super happy."

Team Sky's Sir Bradley Wiggins finished in the peloton on the same time.

With 60km left, Wiggins and his Team Sky team-mates attacked in cross-winds and an 18-strong group of riders, which included Cavendish and several of his team-mates, built a 45-second lead over the peloton but the gap was eventually closed down.

"We sensed the move that split the group," said Cavendish.

"Omega Pharma - Quick-Step is a Belgian team. We felt the crosswinds, knew the split was going to happen, and we just went straight to the front.

"It split and we were there. We were well represented with four guys. But then we turned right and it was a headwind. That's when we thought it was going to be a crosswind.

"If you've got a small group, that much distance, and a headwind, you're never going to stay away. We sat up and didn't deplete our energy any further."