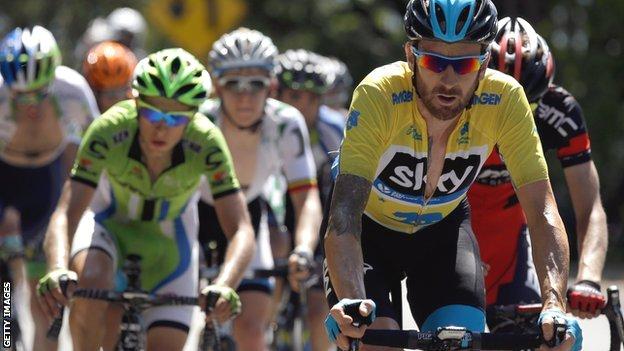 Sir Bradley Wiggins had his lead in the Tour of California cut to 24 seconds as Rohan Dennis won stage three.

Team Sky's Wiggins, whose victory on stage two gave him a 44-second advantage over the Australian, finished ninth on the hilly 174km stage from San Jose to Mount Diablo.

Dennis, riding for Garmin-Sharp, won in four hours, 56 minutes and two seconds, in temperatures of 33C.

"It doesn't get much hotter in a race," said Briton Wiggins, 34.

The 2012 Tour de France champion led with 6km remaining, but 23-year-old Dennis - winner of the Tour of Alberta in 2013 - broke clear late in the 7km climb up Mount Diablo to beat NetApp-Endura's Tiago Machado by six seconds.

Lawson Craddock of Giant-Shimano was two seconds further back in third, with 21-year-old Briton Adam Yates, riding for Orica-GreenEdge and the winner of the recent Tour of Turkey, fourth.

Wiggins, who is using the race as preparation for July's Tour de France, added: "It was just about getting to the top at the end. My biggest concern was exploding.

"Hopefully today was about as hard as it should get for the boys."

Britain's Mark Cavendish, who finished in the peloton, retained his lead in the points competition.

The fourth stage of the eight-stage race takes the riders 166km from Monterey to Cambria on Wednesday.