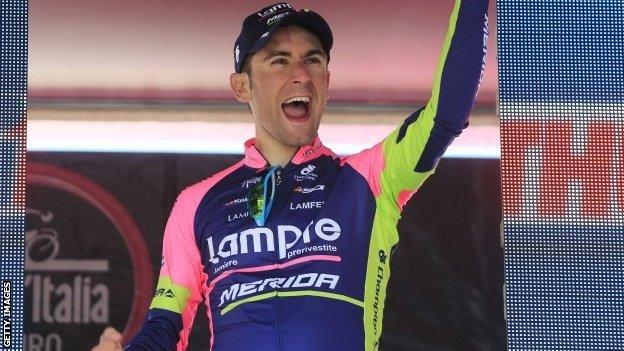 The 24-year-old Lampre rider, who won a stage on his Giro debut in 2011, bided his time in the main group before emerging on the final ascent.

Briton Ben Swift was part of an early breakaway that was reeled in over the final 25km.

What to expect on Thursday's stage six

"If there are breakaway attempts attacking the peloton from the off, it will feel like a long 2.5km up the first climb.

"Hopefully the break will go though and then it will be a long, relatively flat, day to the bottom of the final climb.

"Again, the finish will suit the puncheurs, although it could be a rare day when the breakaway succeeds."

The Australian is 14 seconds ahead of Dutch team-mate Pieter Weening in the general classification with Evans making inroads to move up to third, a further second behind

The conditions were the key to a cagey 200km of racing with blustery winds making for a hard day on the front of a slow-moving peloton.

A breakaway in the early stages contained enough numbers and quality to pose serious questions, with Team Sky's Swift and Grand Tour stage winner Tyler Farrar among the 11 participants.

They had opened up a gap of six minutes at one stage, with Swift having virtual hold of the red jersey after winning an intermediate sprint.

Without a representative in the escape, Orica GreenEdge drove the chasing pack on and their hard work eventually paid off as the breakaway was swallowed up.

However steady rain made a challenging, technical descent even trickier and, amid several crashes, Omega Pharma-QuickStep's Gianluca Brambilla bravely pushed clear of the rest.

His courage could not earn an audacious stage win however as Ulissi, Evans, Julian Arredondo and Joaquim Rodriguez took up position to contest a sprint finish.