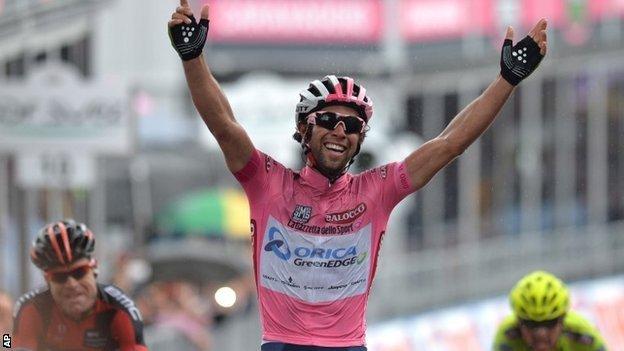 Australian Michael Matthews extended his Giro d'Italia lead to 21 seconds as he avoided a late crash that scattered the field to win stage six.

Matthews, 23, was followed home in a small group by compatriot Cadel Evans, who is now his closest rival in the general classification.

Spain's Joaquim Rodriguez fell in the crash but finished the stage before quitting with broken ribs and thumb.

"It hurts to leave the Giro, but there is no other option," said Rodriguez.

The general classification contender added: "The crashes were bad for all of us. The road was very slippery and we were going 60kph. Just touching your brakes was enough to crash. But that is a risk we always take."

Fellow Katusha riders Giampaolo Caruso and Angel Vicioso were also forced to retire while Irish rider Nicolas Roche also suffered as he finished more than 15 minutes behind Evans to drop to 80th place in the General Classification.

Vicosio broke his right leg, while the 33-year-old Caruso was taken to hospital for X-rays, which revealed no fractures but severe cuts and bruises.

What to expect on Friday's stage seven

"Friday should end with a select group of fast men but not the full-on sprinters.

"What I'd like to happen is a small group of five or six riders break clear on the tough 30km uphill start, then the peloton takes control and sets quite a fierce pace up the final climb which summits quite a long way from the finish, with around 40km remaining.

"That final ascent is maybe only 6-8km, so not super long, but it could be enough to distance some guys."

The crash came as the field picked up pace inside the final 10km before a host of riders went down attempting to negotiate a roundabout on wet roads.

American Tyler Farrar was one of those to make their way home in badly-torn race suits.

The stage-defining incident came with about 10km remaining of the 247km trip from Sassono to Montecassino.

Before that an early and stubborn four-man breakaway, consisting of unheralded Italians Andrea Fedi, Edoardo Zardini and Marco Bandiera and low-profile Colombian Rodolfo Torres, was the main source of interest.

After escaping in the 11th kilometre it was not until they were the same distance from the finish that the quartet were finally reeled in by the peloton.

Evans's BMC team had been massing at the front immediately before the crash and, as chaos descended behind them, they pushed on with leader Matthews for company.

Quintana's Movistar team lead the chase of the eight-strong leading pack, but with their numbers depleted could not return their team leader to the front.

Instead Matthews stalked Evans's back wheel before slipping by him in the final metres to claim his first individual stage win in the race.