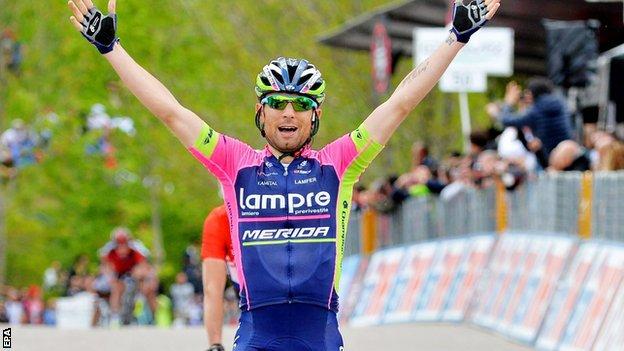 The 24-year-old Italian broke clear from the chasing group in the closing metres to add the mountainous stage eight success to his win on stage five.

"I am euphoric," the Lampre-Merida rider said. "It was a difficult stage and I did not expect to win."

What to expect on Sunday's stage nine

"I can definitely see a breakaway having a chance, because the second rest day of the race follows so some riders will go for broke.

"It is still relatively early in the race and the last week is super hard, so the General Classification guys are going to be racing, but in a controlled way.

"You're not going to win the Giro by winning yesterday and today's stages but you could lose it.

"If you have a bad day you could lose a fair bit of time. It is more important for the race favourites to keep an eye on each other."

"It has been a difficult Giro so far," the 37-year-old leader of the BMC team said. "There were a lot of tired legs in the group today.

"But we are in a good position at the moment and now we head further into the mountains we will see a different kind of race."

Matthews, who predicted he would lose the leader's jersey on Saturday after a week in pink, slipped down the field with 45km remaining as the riders started up the first category Cippo di Carpegna.

The 23-year-old Orica GreenEdge rider still had the energy to wave at television cameras as he dropped out of the bunch on the first true mountain stage of the three-week race.

Trek's Colombian climber Julian David Arredondo was first to the summit and maintained a one minute, 30 seconds advantage over the chasing group on to the ascent of the second category Villagio del Lago 10 kilometres from the finish.

But the 25-year-old was caught by Frenchman Pierre Rolland on the day's tough final climb, the Montecopiolo, and they were eventually hauled in by the peloton in the closing kilometre.

Ulissi powered out of the bunch with 350 metres to go and passed Trek's Croatian Robert Kiserlovski.

Ulissi said: "It was a difficult race because the climbs were too hard for my kind of character. But I am really, really happy."