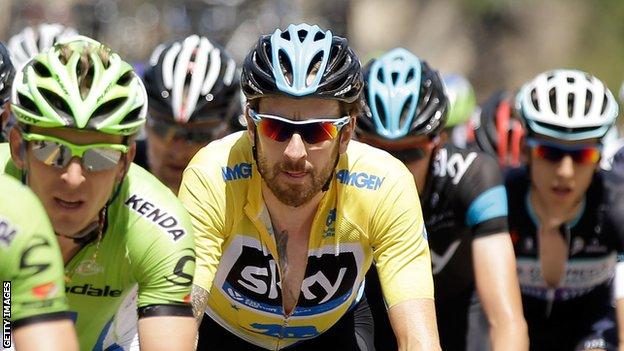 Britain's Sir Bradley Wiggins held on to his 30-second lead in the Tour of California after Peter Sagan sprinted to the stage seven win.

Cannondale's Sagan, 24, powered away from BMC's Thor Hushovd, 36, in the final metres of the 143km route from Santa Clarita to Pasadena.

Wiggins, seeking a first win since last September in the Tour of Britain, said he was pleased to have negotiated the tricky route on Saturday and all eyes would be on nearest challenger Rohan Dennis in the 122.4km finale.

"It was pretty fast on the descent. I was thinking 'a puncture now and it could be over', so I couldn't relax until I'd crossed that line, especially with the speed we were going," said the Briton.

"We'll continue to do the same thing and keep an eye on the Garmin guys, as we've been doing every day.

The eighth and final stage comprises three laps of a circuit which features a short, sharp climb followed by a speedy and technical descent before a sprint finish.