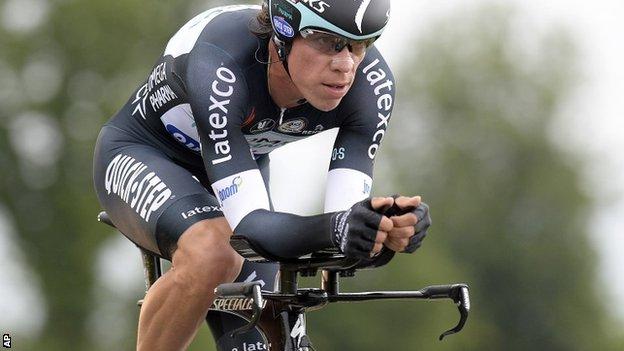 And Uran's time was 94 seconds better than Cadel Evans, who held a 57-second overall lead going into the stage.

What to expect on Friday's stage 13

"This is a massive opportunity for the fast men of the peloton because there are not many chances left for the sprinters to shine.

"This stage is sandwiched between two important days so the General Classification guys are not going to want to do too much work.

"They will be trying to recover from Thursday's efforts and prepare for Saturday's return to the mountains."

With the riders heading out in reverse order, Uran was the penultimate rider down the start ramp in Barbaresco and, by that time, Ulissi, a winner of two stages on this year's Giro, had set the quickest time of the day.

But Uran was quickest through the first intermediate checkpoint, which came after the opening 12km of predominantly uphill racing, and maintained his momentum through the flatter middle section before extending his lead on the final ascent to the finish.

"I am really surprised," said Uran, who becomes the first Colombian to wear the Giro's pink jersey as race leader. "With it being a time trial, I didn't think I would win it, but it is a superb day."

Evans finished third to keep himself in contention for the overall race victory, while Rafal Majka finished fourth on the stage and is fourth overall, almost two minutes back.

The race features six mountain-top finishes in the remaining nine stages, which should suit Movistar rider Quintana, although whether he can claw back the time he has lost on adept climbers Uran and Evans remains to be seen.