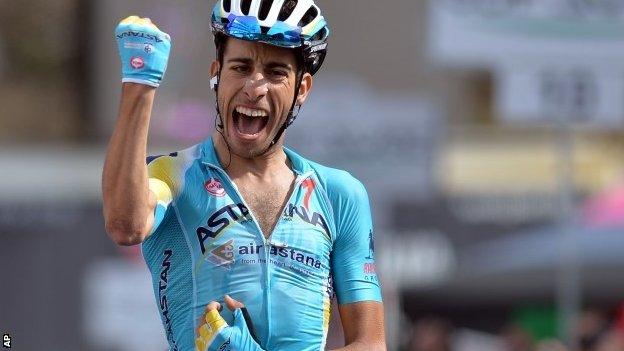 The Astana rider moved up from seventh to fourth in the general classification after triumphing at the summit finish in Plan di Montecampione.

Colombian Uran extended his advantage over Australia's Cadel Evans by 31 seconds to one minute three seconds.

What to expect on Tuesday's stage 16

"This is a big day for the General Classification riders. It's hard to see how it will pan out though because nobody will go too fast up the first two mountains - breakaway riders will take the prizes at the top of the Gavia and Stelvio passes - it will be about reducing the peloton and and racing up the last climb.

"I love doing the iconic climbs like the Gavia and Stelvio. We sprinters are not bad climbers, you just try and get up as best you can. A big bunch of riders will form a coalition on the first climb, called a gruppetto, and it's about supporting team-mates.

"It's after the rest day but we're still going to be tired and if you've not got the break right you will pay a lot."

Pre-race favourite Nairo Quintana made up 24 seconds on Uran but is still 2.40 behind the leader in fifth.

The 225km stage was largely flat until a gruelling 1,400m ascent in the final 20km, which took its toll on several riders, including Evans.

Fabio Duarte finished second, just ahead of his compatriot Quintana, with France's Pierre Rolland in fourth and Uran fifth.

Sardinian Aru, 23, accelerated clear of Duarte and Rolland 2.3km from the finish to clinch the first win of his career.

Poland's Rafal Majka remains third in the overall standings, 1.50 off the pace.

Team Sky's Philip Deignan made a break with 9.5km to go but the Irish rider was caught and then dropped 2.5km from the finish.

After a final rest day on Monday, the Giro resumes on Tuesday with a 139km stage from Ponte di Legno to Val Martello, featuring three mountain climbs.