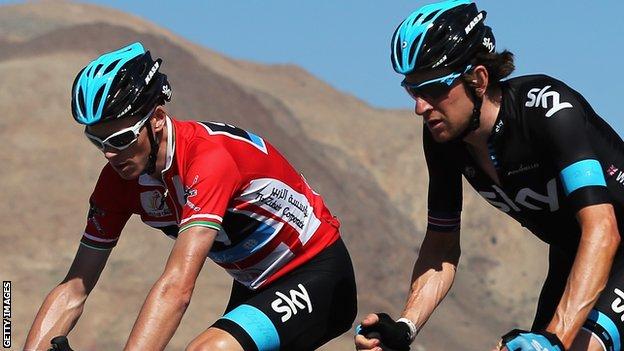 Chris Froome and Team Sky team-mate Sir Bradley Wiggins will race in different warm-up events ahead of the Tour de France, which starts on 5 July.

Tour champion Froome, 29, competes in the prestigious Criterium du Dauphine from 8-15 June, a race he won in 2013.

Wiggins, who won the Dauphine in 2011 and 2012 on his way to becoming the first British Tour de France winner, will race in the Tour of Switzerland.

"Both races will form our selection for the Tour," said Sky's Dave Brailsford.

"Both the Criterium du Dauphine and Tour de Suisse are World Tour events and we are looking to perform in both races," the Team Sky principal added.

"Bradley heads to Switzerland with a strong team after a great win in California and we've got the right group for the Dauphine, especially considering the nature of the course."

Injury prevented Wiggins, 34, from defending his Tour title last year, but tensions between the Olympic time trial champion and Froome had arisen during stage 10 of the 2012 Tour when the latter appeared to disobey orders and put pressure on the multiple Olympic gold medallist with an attack during stage 11.

This year's Tour begins in Yorkshire on Saturday, 5 July, with another stage in the county the following day and a third race from Cambridge to London on Monday, 7 July before the three-week race transfers to France.

Wiggins, who won the Tour of California last month and will race in Switzerland from 14-22 June, has already stated he would "love to be on the start in Britain" for the Tour de France but has accepted "it's about Chris being confident in the team".