Sir Bradley Wiggins says he will not be competing in this year's Tour de France "as things stand".

Wiggins's major wins on the road

Wiggins told the BBC: "The team is focused around Chris Froome.

"I am gutted. I feel I am in the form I was two years ago. Now if I want to go to the Tour again, the reality is that I might have to go elsewhere."

He added: "I also understand that cycling is a team sport and it is all about Team Sky winning and Chris is defending champion.

"If he crashes [in next week's Criterium du Dauphine warm-up race] there'd still be a chance I could come into the team. As it stands, all being well, Chris staying fit and healthy that's the team that'll roll out."

With his contract expiring this year, Wiggins said he is considering his future at Team Sky, adding he had "spoken to a few people" as he explores his options.

The London 2012 time trial gold medallist had planned to switch back to track cycling at the end of this season in a bid to compete for Great Britain at the 2016 Olympics in Rio.

But he said: "Having missed the Tour again this year, I wouldn't like to leave it there. I'd love to go back at some point so there is the chance that I would go back to the Tour next year."

"Cruel though it may appear, Wiggins is Team Sky's bright past. Chris Froome is its present and future."

He and Froome are competing in different warm-up events ahead of the three-week Tour de France, which starts in Yorkshire on 5 July.

Wiggins, who won the Dauphine in 2011 and 2012 on his way to becoming the first British Tour de France champion, will race in the Tour of Switzerland between 14-22 June.

"For the dynamic of the team, Chris has a say, and we haven't raced together all year," said Wiggins. "When you're in the heat of the moment, you need guys you can trust and who have been there for you." 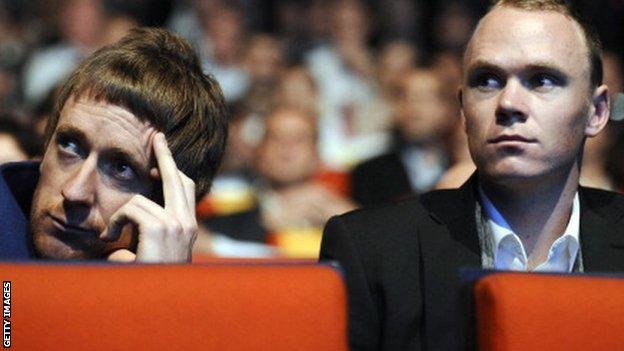 Froome's seven support riders for the Dauphine are likely to form the bulk of the nine men who will make up Team Sky's Tour de France squad.

However, Team Sky boss Sir Dave Brailsford said he will use both races to pick his final line-up for the world's most prestigious cycling race.

Wiggins also admitted his fractious relationship with Froome could be beyond repair.

Stage One: A 190km race from Leeds to Harrogate on Saturday, 5 July.

Stage Two: A 200km stage from York to Sheffield on Sunday, 6 July.

Stage Three: 159km from Cambridge to London on Monday, 7 July before continuing in France.

The pair fell out during the 2012 Tour, when Froome appeared to disobey orders by pulling away from Wiggins during stage 11.

"The Tour is so intense because you're riding for four weeks, six or seven hours a day, you're in each other's pockets," said Wiggins.

"You go through many highs and lows. Tensions can rise between two competitive riders."