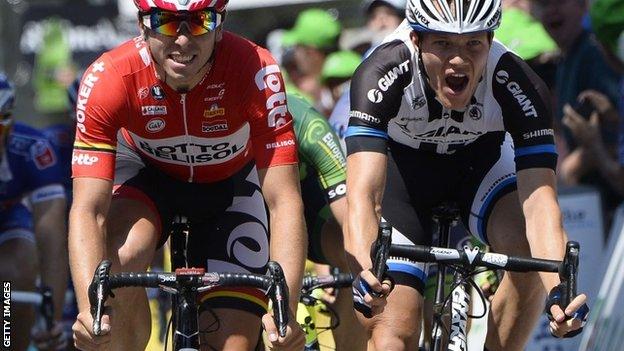 Froome was well protected by his Team Sky team-mates as he came home in the peloton alongside Alberto Contador of Spain, his main rival for the race win.

It was a thrilling finish to an otherwise largely predictable third stage that saw an early breakaway brought back by the peloton.

There was a brief flurry of excitement in the final 20km when an eight-strong group, featuring breakaway specialist Jens Voigt of Germany, raced clear but their efforts came to nothing as the sprinters' teams in the peloton closed down the gap.

A series of speed humps and tight corners in the closing stages contributed to a scrappy finale but the faster-finishing Boeckmans timed his effort a fraction too late as Arndt held on to win by the width of a bike tyre.

Arndt's team-mate, Reinardt Janse Van Rensburg of South Africa, won the sprint for third at the end of the 194km stage.