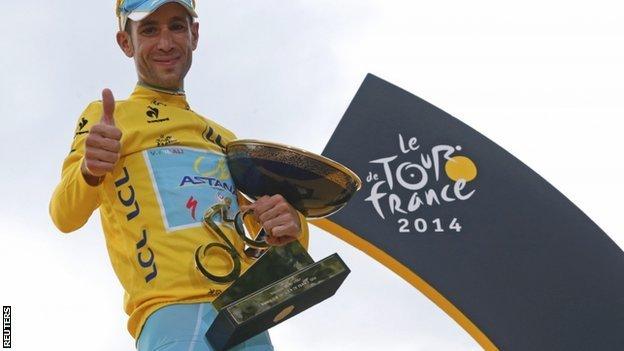 The Grand Depart of the world's most prestigious stage race was hosted by Yorkshire as the Tour de France returned to England for the first time since 2007.

The opening stage took the 198 riders from Leeds to Harrogate via the Yorkshire Dales, while the second stage saw the peloton ride from York to Sheffield, via Holme Moss, before a third stage in England finished on The Mall in London.

The 101st edition of the three-week race then headed to France, and finished in Paris on Sunday, 27 July after 2,277 miles and 21 stages, made up of nine flat stages, five hilly stages, six mountain stages with five altitude finishes, and one individual time trial.

Astana's Vincenzo Nibali took the race lead by winning in Sheffield and then stole a march on his rivals for the overall victory by mastering the cobbles on stage five.

He won two more stages on his way to becoming the first Italian winner of the race since Marco Pantani in 1998. This is the story of his victory.

A grand day out for around one million people in Yorkshire ends on a sour note as Mark Cavendish, Britain's big hope of a stage win, crashes 200m from the finish line. Germany's Marcel Kittel stays upright to win in Harrogate on a day when 42-year-old veteran Jens Voigt shows he still has the legs for a breakaway.

Nine categorised climbs soften up the peloton, with the ascent of Jenkin Road in Sheffield seeing the main General Classification riders Vincenzo Nibali, Alberto Contador and defending champion Chris Froome racing to its summit. Peter Sagan, tipped by many to win the stage, races clear on the descent but he is caught. Nibali breaks clear in the final two kilometres to win as Yorkshire says goodbye to the Tour.

With the absence of the injured Mark Cavendish, Marcel Kittel looks nailed on to win the sprint finish on The Mall and the German does not disappoint. Britain's defending champion Chris Froome stays safe and remains two seconds behind race leader Vincenzo Nibali as the Tour leaves England and heads to France. But it will be back, says Tour director Christian Prudhomme. 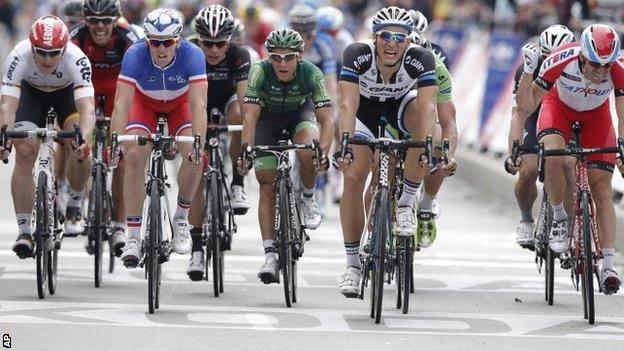 Marcel Kittel delivers a brilliant sprint finish to secure his third stage win of the race as the race as the race moves into France. Britain's defending champion Chris Froome crashes after just five kilometres, bruising his left hip and wrist. However he continues after receiving medical attention to reach the finish and remain two seconds behind overall race leader Vincenzo Nibali.

A dramatic day in wet conditions sees defending champion Chris Froome, already suffering from a crash on stage four, abandon the race after crashing twice more - before the notorious cobbles.

Lars Boom, a specialist in the Paris-Roubaix classic, a one-day race which uses the same cobbled sections, breaks clear with about 4km to go and holds on to take the stage, but the real winner is Vincenzo Nibali who finishes 44 seconds ahead of Peter Sagan and 2min 37sec ahead of biggest rival Alberto Contador.

Crosswinds and rain combine to provide another tough day on the bike as several crashes litter the stage. Team Sky lose another rider as Xabier Zandio hits the deck and cannot continue. Alberto Contador's Tinkoff-Saxo team-mate Jesus Hernandez also crashes out. Andre Greipel sprints to his first stage win of the race as Vincenzo Nibali retains the overall lead. 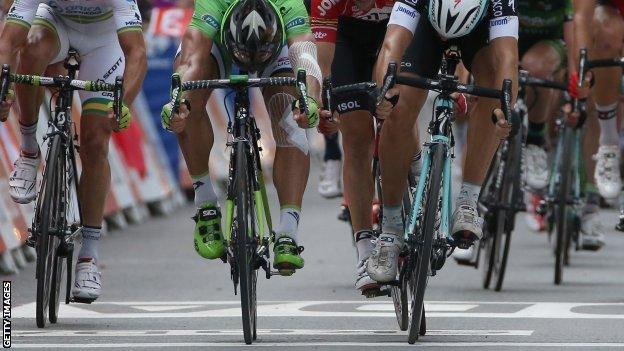 A predictable opening 215km gives way to a chaotic finish as Matteo Trentin wins after a photo-finish in Nancy. Peter Sagan replicates his stage two tactics in Sheffield, racing clear off the final climb but is again caught. A drier day for the riders and the General Classification remains unchanged.

A rare breakaway victory for Blel Kadri delights French fans in the Vosges rain as he takes control of the King of the Mountains jersey. But the big battle in the peloton sees Alberto Contador claw three seconds back on rival and race leader Vincenzo Nibali in the contest for yellow. Nibali tracks the Spaniard and is content to finish in his wake. Team Sky's Richie Porte is up to third while Britain's Simon Yates impresses in the break.

German Tony Martin, more famed for his time-trialling skills, powers away from the rest in a stage featuring six climbs. The general classification is shaken up with Vincenzo Nibali, who began the day in yellow, and main rival Alberto Contador allowing a 28-strong group to head out in pursuit. Frenchman Tony Gallopin takes advantage to supplant Nibali at the top of the overall standings on the eve of Bastille Day.

A day of high drama as Spanish contender Alberto Contador fails in his attempts to rejoin the race after a heavy fall. The two-time champion withdraws and is later revealed to have fractured his leg in the crash. Vincenzo Nibali takes full advantage, snatching back yellow with a commanding ride and moving more than two minutes clear of nearest rivals Team Sky's Richie Porte and Movistar leader Alejandro Valverde.

The first of the race's two rest days. Geraint Thomas tells us that he pulled his brakes and nothing happened on stage 10 and assesses the state of the race.

After winning the yellow jersey on stage nine and losing it on stage 10, Tony Gallopin's eventful Tour continues with a first stage win. The Frenchman seems doomed when his solo break is caught in the final five kilometres, but he kicks again to break clear of Peter Sagan, Michael Rogers and Michal Kwiatkowski. Vincenzo Nibali maintains his healthy lead of more than two minutes in the general classification.

A bunch sprint and a first Tour victory for Katusha's Alexander Kristoff. The Norwegian edges Peter Sagan who continues to dominate the green points jersey classification but is yet to win a stage in the 101st edition of the race. No change in the overall standings with Vincenzo Nibali continuing to lead the way.

Is the Tour over? Italy's Vincenzo Nibali underlines his superiority with a commanding victory in the Alps that extends his lead in the race to more than three minutes over Spain's Alejandro Valverde. Team Sky's plan B, Richie Porte, loses nine minutes after struggling on the final climb in searing heat, so it's back to the drawing board for the British-based team.

A superb solo ride up to the summit finish at Risoul gives Rafal Majka, a man who only found out he was making his Tour debut a few days before the race started, his maiden win. Vincenzo Nibali's excellent form in the mountains continues as he finishes second to put more time into his rivals and he is now four minutes, 37 seconds clear of Alejandro Valverde.

Jack Bauer spends 220km in the break but slips from first to 10th in the final 20m as the sprinters time their race to the line to perfection. Katusha's Alexander Kristoff is the first over the line in sunny Nimes after rainstorms soak the peloton throughout the stage. No change in the overall standings with Vincenzo Nibali retaining his healthy lead.

The second and final rest day. Geraint Thomas says he thought his head was going to explode in Friday's stage in the mountains.

The peloton allows a 21-man breakaway to escape early in the race and it moves 12 minutes clear by the time they reach the final climb, Port de Bales, with 35km to go.

The breakaway then splits, with a group of five, including Michael Rogers and Thomas Voeckler, going clear before a burst of pace from Rogers with 4.5km to go proves decisive. The Australian goes on to win his first Tour de France stage while Vincenzo Nibali retains his lead in the general classification.

Italian Giovanni Visconti makes an initial break up the final ascent but settles for second after being caught by Poland's Radal Majka. The Tinkoff-Saxo rider claims his second win of the Tour and tightens his grip on the polka dot jersey, which is awarded to the race's King of the Mountains.

Vincenzo Nibali finishes third to extend his lead in the general classification to five minutes and 26 seconds over Alejandro Valverde.

Vincenzo Nibali wins his fourth stage of this year's Tour in style to extend his overall lead to seven minutes and 10 seconds. The Italian again shows his superiority in the mountains by keeping a breakaway within striking distance over the iconic Col du Tourmalet before powering up the final climb to the summit finish at Hautacam, reeling in the remaining escapees before going clear himself to win by more than a minute.

Poland's Rafal Majka takes third place as the race leaves the Pyrenees, ensuring he will win the King of the Mountains jersey.

Ramunas Navardauskas escapes in the final 12km of a wet and windy day to become the first Lithuanian to win a stage of the Tour de France.

The Garmin-Sharp rider bursts away from the front of the peloton just after the final survivor of a long five-man break had been caught and, helped by a crash in the final 3km that disrupts the sprinters' teams, stays clear.

Overall leader Vincenzo Nibali takes evasive action after being caught behind the crash but stays upright and keeps his commanding lead of the race.

Triple world time trial champion Tony Martin takes his second stage win of this year's Tour with a dominant display in the Dordogne. The German finishes as the fastest man on the day by 99 seconds.

Vincenzo Nibali will ride into Paris as the champion elect after extending his overall lead by finishing fourth, faster than any of the men below him in the general classification.

The battle for the podium places is also settled. With Alejandro Valvarde unable to challenge, France's Jean-Christophe Peraud moves up to second, leapfrogging compatriot Thibaut Pinot.

Marcel Kittel underlines his sprinting prowess with a fourth stage win on this year's Tour and a second successive victory on the Champs-Elysees in Paris.

Vincenzo Nibali stays upright to ensure his takes the yellow jersey and becomes just the sixth man to win all three Grand Tours. He also slows the peloton when second-placed Jean-Christophe Peraud crashes, allowing the Frenchman to get back to the main bunch, ensuring he does not lose any time.