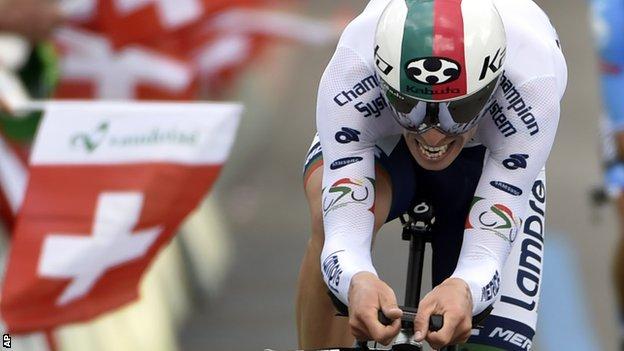 Portugal's world road race champion Rui Costa overhauled Tony Martin on the last day to win the Tour of Switzerland for the third year in succession.

The Portuguese, 27, started the 157km leg from Martigny to Saas-Fee more than a minute behind Martin, but broke clear near the hilly finish to win the stage in four hours 13 minutes 14 seconds.

That gave him the race victory by 33 seconds from Mathias Frank, with Bauke Mollema third and Martin fourth.

Costa will lead the Lampre team at the Tour de France, which starts next month in Yorkshire.

Teams are expected to name their line-ups in the coming days, with 2012 champion Sir Bradley Wiggins likely to be a notable absentee from the Team Sky squad.

His fellow Briton Mark Cavendish, who won Tuesday's stage in Switzerland, should be part of Martin's Omega Pharma-Quick-Step team.