An estimated one million cycling fans gathered in Yorkshire on Saturday as the 2014 Tour de France was given a royal send-off in Leeds.

The three-week race returned to England for the first time since 2007, with two stages in Yorkshire and a third finishing in London on Monday.

Chris Froome is the defending champion, while fellow Briton Mark Cavendish is among the favourites to win stage one.

The 190km (118-mile) first stage, or Grand Depart, was given a royal send-off by the Duke and Duchess of Cambridge and Prince Harry from Leeds Town Hall at midday.

The 198 riders from 22 teams competed in the first stage, which was won by Marcel Kittel, with up to two million people expected to line the UK routes over the weekend.

The four Britons in the race are Team Sky's Froome, 29, and team-mate and BBC columnist Geraint Thomas, 28, while sprint specialist Cavendish, 29, is riding for Omega Pharma-QuickStep, and debutant Simon Yates, 21, for Orica-GreenEdge.

Froome became the second British winner of the race last year, following the victory of team-mate Sir Bradley Wiggins in 2012.

Wiggins, who missed last year's Tour through illness and injury, has been left out of the squad in 2014, a decision Team Sky boss Sir Dave Brailsford said had kept him "awake at night".

Only a handful of the 198 starters have a realistic chance of winning the race's coveted yellow jersey, but Froome is one of them, along with the likes of two-time winner Alberto Contador of Spain, Italy's Vincenzo Nibali and American Andrew Talansky.

"I can't say enough how special it is to come back here as defending champion," said Froome at Thursday's opening ceremony in Leeds. "I'm certainly going to give it my all."

Britons David Millar, of Garmin-Sharp, and Alex Dowsett, of Movistar, both won stages in 2012 but miss the race because of health concerns, while Peter Kennaugh and Ben Swift were left out by Team Sky.

"In an ideal world, I'd have liked to have seen more Brits at this Tour de France," Cavendish said. "Great Britain has been successful. That's a massive part of why the Tour de France has come to the UK again."

The Manxman is expecting the Grand Depart in Yorkshire to eclipse his debut in the 2007 Tour, which started in London.

"London was the best Grand Depart I've been in, but I'm so confident it will be overshadowed by this weekend," he said.

Cavendish has won 25 individual stages - the most of any current rider and equal third on the all-time list behind five-time overall race winners Eddy Merckx (34) of Belgium and France's Bernard Hinault (28) - to add to the overall British Tour successes for Froome and Wiggins.

However, Cavendish has never worn the race leader's yellow jersey and admits "it would be nice" to become just the seventh Briton to achieve that feat by winning Saturday's opening stage, which finishes in his mother's home town of Harrogate.

The cobbles on stage five, the Bastille Day climb to La Planche des Belles Filles on stage 10, and the final day in the mountains on stage 18 are key to Chris Froome's hopes of defending his title.

The yellow jersey is not the only prize on offer in the race. Cavendish is chasing the green jersey, given to the rider during the race who accumulates most points. Those points are awarded for stage wins and performances in the intermediate sprints.

The jersey is often won by a sprinter because points are weighted towards flat stages, which sprinters are more likely to win.

Cavendish's main rivals are likely to be Slovakia's Peter Sagan, who has won the jersey for the past two years, as well as German duo Marcel Kittel and Andre Greipel.

The red and white polka dot jersey is awarded to the Tour's best climber, with points handed out at the top of each categorised climb, which are graded on how steep and long they are.

There is also a white jersey for the Tour's quickest young rider, a team prize and an award for the most aggressive rider on each stage, while the man who is last overall is called the Lanterne Rouge. 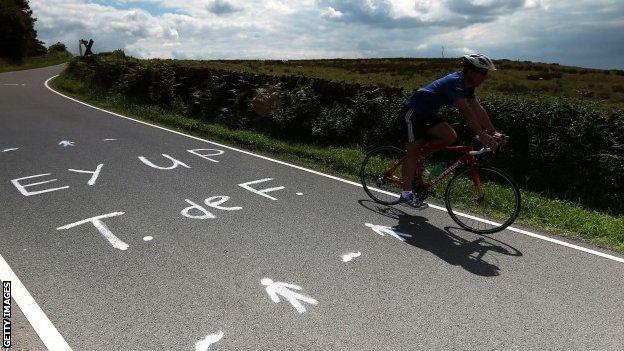 Numerous roads will be closed throughout Yorkshire this weekend but Northern Rail is putting on 50% more trains to help transport fans.

Local authorities across Yorkshire and the Humber region have teamed up with key partners to come up with a 12-year plan to capitalise on the Grand Depart.

Among the legacy promises are free access to a bike and training to use it, a regional cycle-hire network and a new world-class three-day race.

Yorkshire is expected to enjoy the lion's share of at least £100m in economic benefits from the 2014 Grand Depart, but the region's leaders are also keen to see more people commuting by bike, riding for fun and fitness, and a major boost in cycling tourism.