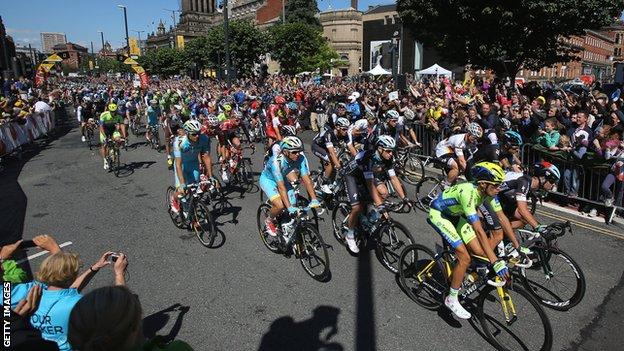 Edinburgh aims to renew its bid to host the Tour de France's Grand Depart before the end of this decade.

This year's Tour opened in Leeds on Saturday, with Yorkshire having beaten off competition from Edinburgh.

"We are looking at perhaps forming a bid with Event Scotland for either 2018 or 2019," Steve Cardownie of Edinburgh City Council told BBC Radio Scotland.

"We will be that much more equipped because we will have seen first hand how it operates in Yorkshire."

Up to two million people are expected to line the UK routes as the famous three-week race returns for the first time since 2007, with two stages in Yorkshire and a third finishing in London on Monday.

When the organisers were last here, they were waxing lyrical about the city

Froome became the second British winner of the race last year, following the victory of Sir Bradley Wiggins in 2012.

Yorkshire is expected to enjoy the lion's share of at least £100m in economic benefits from the Grand Depart, while the television audience is estimated at three-and-a-half billion.

Councillor Cardownie was involved in Edinburgh's 2014 bid, while Florence was also in the running.

"We've staged cycling events in the past, we've had athletic events and, of course, we have our fantastic festivals," he said.

"We are always in the market for something new, something different.

"We were working with Event Scotland with a view to bringing the Grand Depart and some of the early stages to Edinburgh in 2017.

"We were encouraged to bring that bid forward to 2014 and Yorkshire beat us to it.

"When the organisers were last here, they were waxing lyrical about the city and they could see themselves that it's good for the Tour.

"It's not just good for Edinburgh, it's good for the Tour."