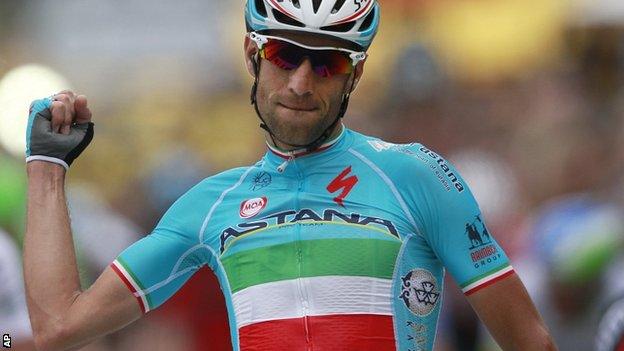 The Astana rider broke clear of a group including Britain's defending champion Chris Froome and double winner Alberto Contador, who came in two seconds back.

"Vincenzo Nibali took the victory from under the noses of guys like Peter Sagan. Sagan was the guy who we said, if he was near the front, it would be his to lose.

"Well, he lost it big style - maybe he was too flamboyant in the final climb. All the action was in the descent into Sheffield, Nibali took it from everyone."

Estimates suggest more than 2.5 million people lined the route in Yorkshire for the first two stages over the weekend.

Britain's Mark Cavendish was ruled out of the Tour before the start of stage two after his crash on the opening day.

Spain's Contador was 13th and Froome 19th, with the Briton moving to fifth overall after his sixth-placed finish in Harrogate on day one and Contador on the same time in eighth.

The route passed through Harrogate, Keighley, and Huddersfield before reaching Sheffield, taking in areas made famous by the Bronte sisters and TV series Last Of The Summer Wine.

The third stage will take the riders from Cambridge to London on Monday, before the race heads to France.

On Sunday around 60,000 fans lined the road on Holme Moss, the longest and toughest of the stage's nine categorised ascents, and there were thousands more on each of the other eight.

"It was really tough racing and the crowds were just incredible. I had goosebumps going up Holme Moss, said Froome, who was cheered on by many fans in Yorkshire.

"It was all about staying out of trouble and avoiding any major issues or big splits."

With five of the stage's climbs packed into the final 60km, there was always going to be a cagey opening and a break of seven riders was allowed to establish a two-minute lead from the off.

Blel Kadri, the lone man left from the seven that broke clear in the opening kilometre, had the honour of reaching the summit of Holme Moss first but he was caught on the next climb at Midhopestones and the race opened up.

What awaits in stage three

"This is pretty much the same as stage one, although the finish will be flatter on The Mall in London. I'm sure it's going to be manic and I'm sure the German guys Marcel Kittel and Andre Greipel will be up for it. However, it's not just down to those two sprinters; it's their lead-out riders who can make the difference."

Team Sky's Geraint Thomas moved to the front of the peloton, trying to keep Froome out of trouble, but he was a little unhappy with some spectators on the route, describing the ones taking 'selfies' as "a pain" as they were not only putting themselves in danger, but the riders as well.

Indeed there were incidents where riders had to push over-enthusiastic fans to the side, although given the vast numbers, those instances were few.

The final climb, Jenkin Road in Sheffield, produced the most drama as many riders struggled with the steepness of the 800m ascent, which reached a gradient of 33% in places.

Froome delivered a small psychological blow, though, when he raced clear of rivals Contador and Nibali to reach the top first.

Peter Sagan attempted to break everyone on the descent but his efforts were wasted and he then had no answer as Nibali, who won the 2013 Giro d'Italia, surged clear in the final couple of kilometres to become the first Italian to wear the yellow jersey since 2009.

"My main goal is to get a good result at the end of the Tour de France," said Nibali, who has now led all three Grand Tours.

"I don't want to lose my head but I'm delighted to get the yellow jersey after having won the red jersey at the Vuelta a Espana and the pink jersey at the Giro d'Italia.

"This victory is important for me, the team and Italy."