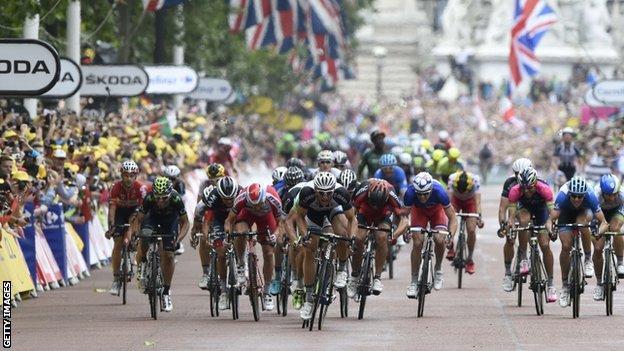 The Giant-Shimano rider, who has won two of three stages in this year's race having triumphed on Saturday, prevailed as thousands watched on The Mall.

Slovakia's Peter Sagan finished second, ahead of Australia's Mark Renshaw in third, on the final leg in England.

Kittel said his sixth Tour stage victory was among the biggest of his career.

"No surprise with the winner, the only surprise is Andre Greipel was not there with him. He faded away after his Lotto-Belisol team-mates did so much work. With Mark Cavendish away there was no point in looking at anyone other than Kittel here on The Mall."

Listen to the 5 live podcast

"Emotionally, this win is close to the one I got on the Champs-Elysees in Paris last year," the 26-year-old said.

"Winning on The Mall, that's what I dreamed of. It's really fantastic to win here. On the finishing line, the crowd was fantastic. I love the atmosphere."

Froome and his Team Sky colleagues were similarly happy with their efforts over the first three days as they safely negotiated two tricky stages in Yorkshire and a slippery rain-soaked finish in London.

The 29-year-old is two seconds behind Nibali, who is one of his main rivals for victory.

"The big thing was to get through the stage, don't lose time or have any issues or incidents," said Froome.

"I'm feeling good. On Tuesday we can expect a similar day but on day five we hit the cobbles and that will be quite a shake-up, literally."

Thousands of people lined Monday's 155km (96-mile) route, mirroring scenes on the first two days in Yorkshire, as the riders went from Cambridge, into Essex and past a succession of London landmarks.

NetApp Endura rider Jan Barta and Bretagne-Seche's Jean-Marc Bideau raced clear of the peloton in the opening metres of the race and they were allowed to build up a lead of more than four minutes by a peloton that appeared keen to take it easy, following Sunday's strenuous day, which featured nine categorised climbs.

Monday's third stage was a much flatter affair, with no climbs, and the racing finally became animated as the riders approached the outskirts of London.

Barta, sensing Bideau was running out of energy, made a solo bid for the stage win with 8km remaining as they emerged from the Limehouse Tunnel in east London.

However, the Czech rider was unable to hold off the chasing pack, who caught him with 6km remaining.

What awaits in stage four

"The first stage in France of this year's race is a typical sprint stage. We may get some crosswinds which could spice it up a bit but all being well, it will be a sprint. It will be a bit of a stressful day, especially if there is a bit of wind, or narrow roads, because you can get silly little crashes."

The sprinters' teams came to the fore with Giant-Shimano expertly delivering Kittel to the front a couple of hundred metres from the finish line.

Cannondale rider Sagan and Renshaw, who is usually trying to lead out his Omega Pharma - Quick-Step team-mate Mark Cavendish, were unable to get round the German, who took the win.