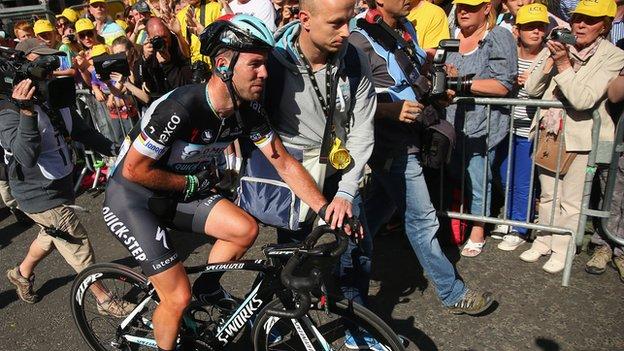 Mark Cavendish is set to miss the Commonwealth Games after being told he must have surgery on his injured right shoulder.

The Isle of Man rider, 29, dislocated the shoulder and damaged ligaments in a fall during the sprint finish on stage one of the Tour de France on Saturday.

He is expected to be out for around six weeks, with the Commonwealth Games due to start in Glasgow on 23 July.

"It's worse than I was hoping," Cavendish said.

Scan results show the Manxman has ruptured all ligaments around the joint at the top of his shoulder after colliding with Simon Gerrans during the sprint in Harrogate.

Cavendish added: "It is really painful, but at the moment all I can do is focus 100% of my effort on my recovery, to be able to get back racing as quickly as possible."

The sprinter had previously said the idea of racing alongside old friends was "special" after being named in a 46-strong Isle of Man team for the Glasgow Games, where he was hoping to contest the men's cycling road race alongside Peter Kennaugh.

"It is a blow to lose one of our major medal winning opportunities but I don't want to detract from the other athletes in what is our strongest ever team.

"It is a loss but not a disaster," he added. "Whether he can compete or not we would still want him to be with us in Glasgow."