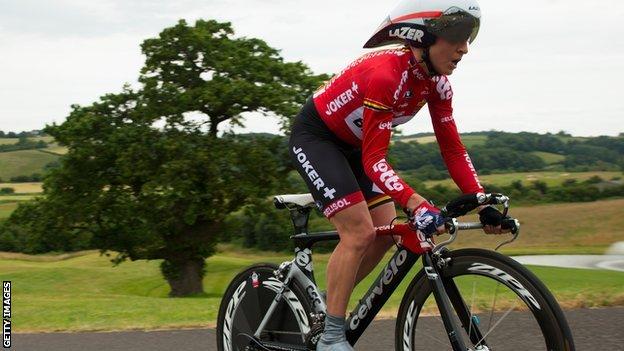 The 31-year-old broke away from the peloton 28km into the 112km stage from Gaiarine to San Fior.

The Lotto-Belisol rider was joined by six other riders but attacked again on a later climb.

She held off the chasing pack, which included race leader Marianne Vos, to claim the stage by 15 seconds.

Pooley, who won a silver medal at the 2008 Olympics and is the national time trial champion, told BBC Sport: "It was a long hard day out in front but good for time trial training.

"It came right down to the line: the chasing group with Vos and three team-mates was only about 10 seconds behind me at 1km to go, and I was sure they'd catch me.

"I was utterly delighted that I made it - it gives me a bit more confidence, after feeling less than average for a lot of the season. I'm really grateful to my team-mates for their support in the race and for believing in me."

World and Olympic champion Vos leads the general classification by 45 seconds with three stages to go, with her Rabobank Liv team dominating the race.

Pooley will be competing at the Commonwealth Games in Glasgow and will also take part in the women's La Course on the final day of the Tour de France on 27 July.

It is the first time the women will race on the same day as the men although Pooley and other top riders are campaigning for a women's Tour de France to be run alongside the men's race.

There was a women's version, the last in 2009 which Pooley won, but it was held at a different time and ended because of a lack of media coverage and sponsorship.